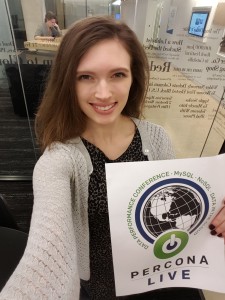 Percona: Give me brief history of yourself: how you got into database development, where you work, what you love about it.

Kat: I’m a full stack engineer at the Washington Post. I started there as a Java developer, and in the beginning all of my projects’ data tiers were in MySQL and Oracle. About two years ago my team began developing a form building tool called the Submission Platform. We created a prototype of the tool using a full Javascript stack and MongoDB (the MEAN stack) and it was so quick to develop and fit the use case so well that we decided to give it a shot for real. While we were learning to work with a full JS stack and MongoDB, the Post was undergoing a shift too. We’ve adopted a Dev Ops model that lets our developers have more control over the environments their code runs in.

Percona: Your talk is going to be on “Shifting the Paradigm: MongoDB and the MEAN Stack.” In relation to media, what are the challenges you faced that caused you to develop and implement the Submission Platform? And why MongoDB and MEAN?

Kat: We realized we wanted to create the Submission Platform when we heard that editors in the newsroom were spending hours curating user submitted content. One story in particular, the annual Peeps Contest, received hundreds of submissions from readers, each containing photos of a “Peeps Diorama.” No third party tool was suited to a newsroom’s curation process. No one was handling photos in submissions in a way that was efficient to view, vote on and rank. We could do better.

When we started thinking about how our data should be structured, MongoDB became the obvious choice. If we had stored our submissions in a relational database, in order for submissions for different forms to have the structural flexibility we needed, each submission would have had to be stored across six tables. Then we would have to reference all six tables when retrieving a submission. We had a working model for this, but when we tried our prototype in MongoDB and saw that each submission could be stored in a single collection, it was clear that Mongo’s flexible schema-less structure was a more natural fit for our data.

Percona: I’m assuming that accessing data from the cloud is a big deal for your field . . . what is the implications of easy access to data? How do data cloud technologies impact you and your customers’ needs (internal or external)?

Kat: We recently moved nearly all of our projects to AWS. As a developer newly adopting the Dev Ops model I found AWS’ tools and documentation incredibly helpful. Developers at the Post have more control than ever over the environments their code runs in and that’s shortening the time it takes us to get a project from conception to deployment.

Kat: I’m excited to hear the problems faced by other developers, architects and DBAs and how they were able to solve those problems. Some of the best interactions I’ve had at conferences in the past have been when a speaker or attendee tells me a real world problem they’ve faced and what they did to solve it. When I’m trying to learn, nothing beats a real world example.

To hear Kat’s talk on Shifting the Paradigm: MongoDB and the MEAN Stack, register for Percona Live Data Performance Conference 2016. Use the code “FeaturedTalk” and receive $100 off the current registration price!

For even more information about MondoDB and its applications, register for Percona’s MongoDB Crash Course at Percona Live 2016. Crash Courses are led by Percona MySQL experts who will show you the fundamentals of MySQL or MongoDB tools and techniques.