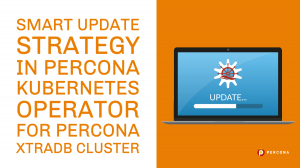 In Percona Kubernetes Operator for Percona XtraDB Cluster (PXC) versions prior to 1.5.0, there were two methods for upgrading PXC clusters, and both of these use built-in StatefulSet update strategies. The first one is manual (OnDelete update strategy) and the second one is semi-automatic (RollingUpdate strategy). Since the Kubernetes operator is about automating the database management, and there are use cases to always keep the database up to date, a new smart update strategy was implemented.

The smart update strategy can be used to enable automatic context-aware upgrades of PXC clusters between minor versions. One of the use cases for automatic upgrades is if you want to get security updates as soon as they get released.

This strategy will upgrade reader PXC Pods at first and the last one upgraded will be the writer Pod, and it will also wait for the upgraded Pod to show up as online in ProxySQL before the next Pod is upgraded. This is needed to minimize the number of failovers during the upgrade and to make the upgrade as smooth as possible.

To make this work we implemented a version-unaware entrypoint and a Version Service to be queried for the up-to-date versions information.

The non-version specific entrypoint script is included in the operator docker image and is used to start different PXC versions. This makes the operator version not tightly coupled with a specific PXC docker image like it was done before, so one version of the operator will be able to run multiple versions of PXC cluster.

Version Service, which runs at https://check.percona.com/ by default, provides database version and alert information for various open source products. Version Service is open source and it can be run inside your own infrastructure, but that will be covered in some other blog posts.

How Does it Work?

When smart update is enabled and a new cluster has started, the values for docker images in the cr.yaml file will be ignored since the intention is to get them from the Version Service.

If smart update is enabled for an existing cluster, then at the scheduled time a version of the currently running PXC cluster, Kubernetes operator version, and the desired upgrade path will be provided to the Version Service. Version Service will return the JSON object with a set of docker images that should be used in the current environment. After that, the operator will update the CR with the new image paths and continue with deleting and redeploying the Pods in optimal order to minimize failovers.

The upgrade will not be done if the backup operation is in progress during the check for updates since the backup has a higher priority, but instead, it will be done next time the Version Service is checked.

With smart update functionality, you can also lock your database to a specific version, basically disabling automatic upgrades, but when needed use the smart update to trigger context-aware upgrades or just changes to resources.

This is how the upgrade might look in the operator logs (some parts stripped for brevity):

As you can see, the initial PXC version deployed is 5.7.29, after which the smart update was enabled with the schedule to check for updates every minute (this is done for the test only). After that, smart update contacted the Version Service and started the upgrade process to version 5.7.30. The Primary Pod identified was PXC Pod 0, so firstly Pods 2 and 1 (readers) were upgraded, and only after that Pod 0 (writer), and at the end, the message was logged that the upgrade process finished.

As already mentioned, updateStrategy can be OnDelete or RollingUpdate in previous versions, but to use automatic upgrades it should be set to SmartUpdate.

Value of the upgradeOptions.versionServiceEndpoint option can be changed from the default if you have your own Version Service running (e.g. if your cluster doesn’t have a connection to the Internet and you have your own custom docker image repositories).

The most important setting is the upgradeOptions.apply option, which can have several values:

upgradeOptions.schedule is a classic cron schedule option and by default, it is set to check for new versions every day at 4 AM.

A smart update strategy can only be used to upgrade PXC clusters and not the operator itself. It will only do the minor version upgrade automatically and it cannot be used for downgrades (since, as you may know, the downgrades in MySQL from version 8 might be problematic even between minor versions).

If there is a need to always keep the PXC cluster upgraded to the latest/recommended version, or if you just want to facilitate some benefits of the new smart update strategy even without automatic upgrades functionality, you can use version 1.5.0 of the Percona Kubernetes Operator for Percona XtraDB Cluster for this.

Tomislav joined Percona in 2014 as a Build/Release Engineer and later moved to a QA Engineer role. Previous to that he was working in the banking industry in different roles from testing and development to change management. He lives in Croatia with his wife and two kids and likes to spend free time riding a bicycle or homebrewing.