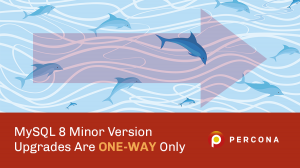 In the many years we have used MySQL, we got accustomed to the fact that upgrades from MySQL 5.7.11 to 5.7.12 was a minor event. This meant that if something was going wrong, we could roll back the binaries and be happy again.

From MySQL 8, this is no longer true. Any upgrade, even minor, is seen as irreversible. (This is valid for Percona Server for MySQL as well.)

All good we made it!

But then we realized that the just-upgraded instance has something that doesn’t work as expected.  At this point, we may want to roll back our installation, and put back the 8.0.17 binaries.

But once we have done that and we start MySQL again, our instance will fail to start and our mysql log shows:

We cannot roll back

This is clearly stated in the MySQL documentation.  You may not like it, but that is how it is now.

Here are some things to think about. Upgrading a minor MySQL version in the past was a trivial activity, and very often automation was doing that silently. That was not the best practice but it was the reality.  At the same time, testing was very often superficial, if done at all.

That attitude must change.

Also keep in mind that IF you take a backup, if you have terabytes or even maybe just a GB of data, the rollback will not be immediate at all.

Given that, you should:

One last but NOT SUPPORTED approach (see documentation), is to rely on replication as described in Replicating from MySQL 8.0 to MySQL 5.7.  But remember, this is done at your own risk, given it is not fully supported by MySQL/Oracle.

These are the minimal steps needed to perform minor version upgrades and to be safe.  Great MySQL to everybody!