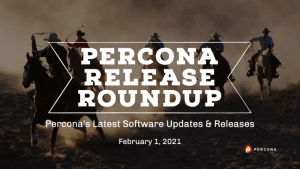 Our Release Roundups showcase the latest Percona software updates, tools, and features to help you manage and deploy our software. It offers highlights and critical information, as well as links to the full release notes and direct links to the software or service itself to download.

Today’s post includes those releases and updates that have come out since January 18, 2021, including many updates and feature additions to Percona Monitoring and Management, as well as updates to the Percona Distribution for MongoDB and Percona Backup for MongoDB.

On January 28, 2021, Percona Distribution for MongoDB 4.4.3 was released. It is a collection of solutions to run and operate your MongoDB efficiently with the data being consistently backed up, consisting of Percona Server for MongoDB 4.4.3-5 and Percona Backup for MongoDB 1.4.1.

January 28, 2021, saw the release of Percona Server for MongoDB 4.4.3-5, a drop-in replacement for MongoDB 4.4.3 Community Edition. Improvements in this release include support for multiple LDAP servers for authentication and the addition of validateLDAPServerConfig config option.

Percona Backup for MongoDB 1.4.1 was released on January 28, 2021. A distributed, low-impact solution for consistent backups of MongoDB sharded clusters and replica sets, this is a tool for creating consistent backups across a MongoDB sharded cluster (or a single replica set), and for restoring those backups to a specific point in time. There are several improvements in this release, including the optimization of response time from storage for pbm status, enablement of Kerberos authentication for PBM by adding support for GSSAPI, and the prevention of a restore from an incomplete backup.

And last, but certainly not least, January 28, 2021, saw the release of Percona Monitoring and Management 2.14.0, a free and open-source platform for managing and monitoring MySQL, MongoDB, and PostgreSQL performance. There are many new features, improvements, and bug fixes in this release, and we hope you will review the release notes for a full list. Some of the release highlights include:

That’s it for this roundup, and be sure to follow us on Twitter to stay up-to-date on the most recent releases! Percona is a leader in providing best-of-breed enterprise-class support, consulting, managed services, training, and software for MySQL, MongoDB, PostgreSQL, MariaDB, and other open source databases in on-premises and cloud environments.