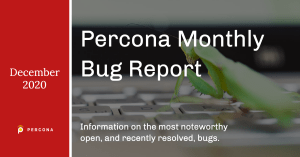 Here at Percona, we operate on the premise that full-transparency makes a product better. We strive to build the best open-source database products, but also to help you manage any issues that arise in any of the databases that we support. And, in true open-source form, report back on any issues or bugs you might encounter along the way.

In this December 2020 edition of our monthly bug report, we have the following list of bugs:

PS-7264 (MySQL #83799) ALTER table fails with the following error for a table with a self-referential (referring to the same table), leaving the table in an inconsistent state.

After mysqld restart accessing this table will throw a warning for missing foreign key indexes.

PS-5641 (MySQL#95863): Deadlock on MTS replica while running administrative commands, caused by one of the MTS thread and administrative command thread where both are waiting for commit lock. As a result of this bug, you may see replication lag along with deadlock. This is a design flaw in the way MTS locks interact with non-replication locks like MDL or ACL locks, and the lack of deadlock detection infrastructure in replication.

There are three ways of hitting this issue:

PS-7437 (MySQL#101716): We use Performance_Schema to check various stats while troubleshooting but you need to be careful while checking memory stats from memory_summary_by_account_by_event_name table which shows incorrect “current_number_of_bytes_used” value for events.

PXC-3418: PXC Cluster node can hang when there is a concurrent read-write load on the table and there is a parallel in-place ALTER TABLE is happening on the table.

For example, case deadlock can be seen with the following steps:

PXC-3366: Upgrading SSL traffic enabled  PXC 5.7 to PXC 8.0 will not show any status/variable, it will give empty output always. Also, taking backup of this upgraded PXC 8.0 node using xtrabackup will fail with a crash due to this bug.

PXB-2375:  In some cases, xtrabackup will write the wrong binlog filename, pos, and GTID combination info in xtrabackup_binlog_info.

A critical bug since it can cause data inconsistency in the user environment. It potentially affects who rebuilds tables with foreign keys. Affects those who rebuild tables with a self-referencing foreign key.

Starting from PMM 2.12.0 release, it integrated with VictoriaMetricsDB and replaced Prometheus as its default method of data ingestion.

It has easy workaround as follows:

PMM-7178: PMM-PostgreSQL monitoring, pg_stat_monitor integration is broken due to a missing column in PostgreSQL.

This query fails on the PostgreSQL side because many of the columns (for example, total_calls, effected_rows, tables_names) are not existing anymore in the pg_stat_monitor view.

A bug is valid for –query-source=pgstatmonitor, with default query-source i.e pg_stat_statements we don’t see this issue.

With a hidden replica (with/without any delay specified). Another replica will show a delay of the max unsigned integer value (about 136 years).

The problem here is that sometimes, MongoDB reports (in getDiagnosticData) that the primary is behind the secondary. Since timestamps are unsigned ints, subtracting a bigger number produces an overflow and that’s why we see 100+ years lag.