Introducing the Premiere Release of Percona Distribution for MongoDB 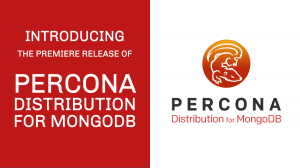 Percona is pleased to announce the release of Percona Distribution for MongoDB. This release combines two existing Percona products, Percona Server for MongoDB and Percona Backup for MongoDB, into one simple to install package. The distribution is an open-source enterprise MongoDB solution bringing together the key features and functionality that enterprises need such as:

Percona Backup for MongoDB gives you an easy command-line interface to perform a consistent backup/restore of clusters and non-sharded replica sets. It uses S3 (or S3-compatible) object storage for the remote store. Percona Backup for MongoDB can improve your cluster consistency guarantee compared to the filesystem snapshot or mongodump method, saving you time and effort.

Enterprises looking to achieve optimum performance with MongoDB can rely on Percona to deliver high-performance and reliability through Percona Distribution for MongoDB, and support, consulting, and managed service offerings for MongoDB.

Check out this blog for details on the new features of Percona Server for MongoDB 4.2.