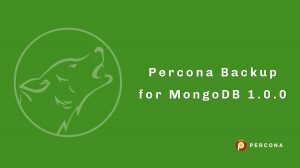 Percona is happy to announce the GA release of our latest software product Percona Backup for MongoDB 1.0.0 on September 23, 2019.

Percona Backup for MongoDB is a distributed, low-impact solution for consistent backups of MongoDB sharded clusters and replica sets. This is a tool for creating consistent backups across a MongoDB sharded cluster (or a single replica set), and for restoring those backups to a specific point in time. The project was inspired by (and intends to replace) the Percona-Lab/mongodb_consistent_backup tool.

Please report any bugs you encounter in our bug tracking system.