There can be a lot of confusion and lack of planning in Percona XtraDB Clusters in regards to nodes becoming desynchronized for various reasons.  This can happen a few ways:

When I say “desynchronized” I mean a node that is permitted to build up a potentially large wsrep_local_recv_queue while some operation is happening.  For example a node taking a backup would set wsrep_desync=ON during the backup and potentially fall behind replication some amount.

Some of these operations may completely block Galera from applying transactions, while others may simply increase load on the server enough that it falls behind and applies at a reduced rate.

If a cluster is fairly busy, then the flow control that CAN happen when the above operations catch up MAY be detrimental to performance.

Let us take my typical 3 node cluster with workload on node1.  We are taking a blocking backup of some kind on node3 so we are executing the following steps:

This includes up through step 3 above.  My node1 is unaffected by the backup on node3, I can see it averaging 5-6k writesets(transactions) per second which it did before we began: 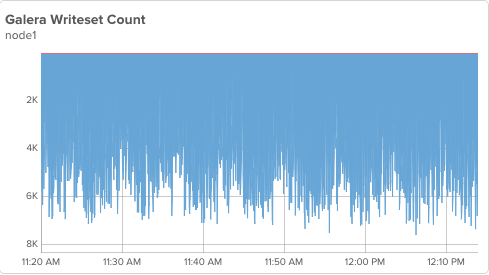 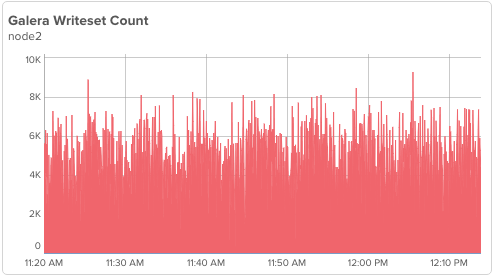 but node3 is not applying and its queue is building up: 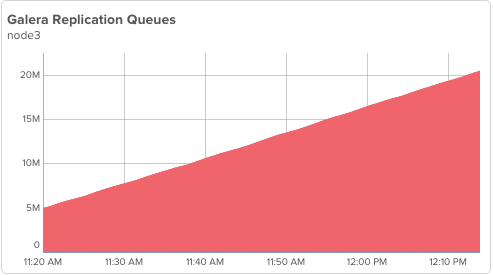 Let’s examine briefly what happens when node3 is permitted to start applying, but wsrep_desync stays enabled: 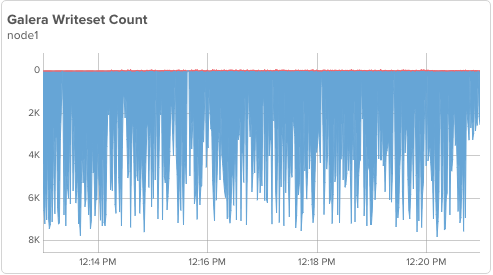 node1’s performance is pretty much the same, node3 is not using flow control yet. However, there is a problem: 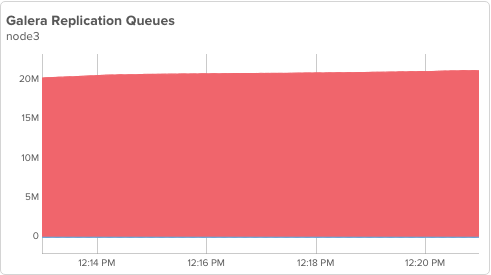 It’s hard to notice, but node3 is NOT catching up, instead it is falling further behind!  We have potentially created a situation where node3 may never catch up.

The PXC nodes were close enough to the red-line of performance that node3 can only apply just about as fast (and somewhat slower until it heats up a bit) as new transactions are coming into node1.

This represents a serious concern in PXC capacity planning:

Nodes do not only need to be fast enough to handle normal workload, but also to catch up after maintenance operations or failures cause them to fall behind.

Experienced MySQL DBA’s will realize this isn’t all that different than Master/Slave replication.

Flow Control as a way to recovery

So here’s the trick:  if we turn off wsrep_desync on node3 now, node3 will use flow control if and only if the incoming replication exceeds node3’s apply rate.  This gives node3 a good chance of catching up, but the tradeoff is reducing write throughput of the cluster.  Let’s see what this looks like in context with all of our steps.  wsrep_desync is turned off at the peak of the replication queue size on node3, around 12:20PM: 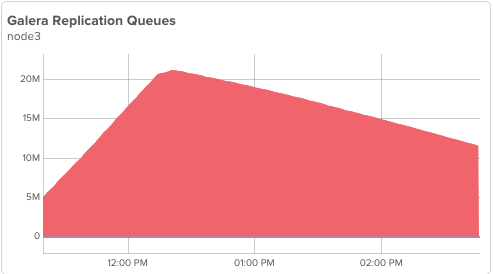 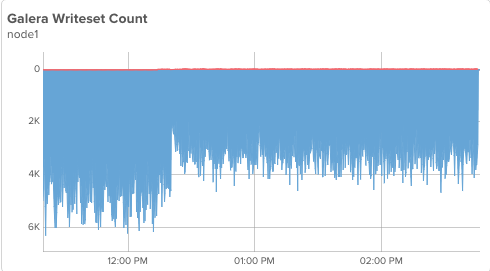 So at the moment node3 starts utilizing flow control to prevent falling further behind, our write throughput (in this specific environment and workload) is reduced by approximately 1/3rd (YMMV).   The cluster will remain in this state until node3 catches up and returns to the ‘Synced’ state.  This catchup is still happening as I write this post, almost 4 hours after it started and will likely take another hour or two to complete.

I can see a more realtime representation of this by using myq_status on node1, summarizing every minute:

This reports around 20-25 seconds of flow control every minute, which is consistent with that ~1/3rd of performance reduction we see in the graphs above.

There are a lot of flow control messages (around 30) per minute.  This is a lot of ON/OFF toggles of flow control where writes are briefly delayed rather than a steady “you can’t write” for 20 seconds straight.

It also interestingly spends a long time in the Donor/Desynced state (even though wsrep_desync was turned OFF hours before) and then moves to the Joined state (this has the same meaning as during an IST).

As always, it depends.

If these are web requests and suddenly the database can only handle ~66% of the traffic, that’s likely a problem, but maybe it just slows down the website somewhat.  I want to emphasize that WRITES are what is affected here.  Reads on any and all nodes should be normal (though you probably don’t want to read from node3 since it is so far behind).

If this were some queue processing that had reduced throughput, I’d expect it to possibly catch up later

This can only be answered for your application, but the takeaways for me are: