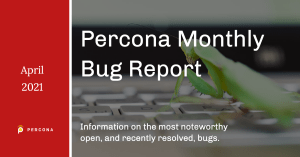 Here at Percona, we operate on the premise that full transparency makes a product better. We strive to build the best open-source database products, but also to help you manage any issues that arise in any of the databases that we support. And, in true open-source form, report back on any issues or bugs you might encounter along the way.

We constantly update our bug reports and monitor other boards to ensure we have the latest information, but we wanted to make it a little easier for you to keep track of the most critical ones. These posts are a central place to get information on the most noteworthy open and recently resolved bugs.

In this April 2021 edition of our monthly bug report, we have the following list of bugs:

– Execution of a prepared statement that performed a multi-table UPDATE or DELETE was not always done correctly.

PS-7477 (MySQL#101257) : MySQL-8 Crash. Prepared statements involving stored programs could cause mysql to crash due to heap-use-after-free memory problems. Crash can be seen also for a table with a trigger and running INSERT/UPDATE on it.

MySQL#102586:  When doing a multiple-table DELETE that is anticipating a foreign key ON DELETE CASCADE, the statements work on the primary but it breaks row-based replication.

Recently MySQL 8.0.24 released with many improvements and bug fixes, and following are the few noticeable changes:

The issue with this bug is that normally, in TOI mode, when ALTER TABLE comes, the master node finishes already running INSERTs first, then it finishes quickly and does not affect the performance of SELECT queries on reader nodes at all.

However, sometimes it hangs for a long time and blocks other queries. With a high number of wsrep_slave_threads, the pxc node is also crashed.

Example:  ALTER/CREATE table aborted on node1, but the table creation succeeds on the replica nodes.  This may be the case with all DDL.

PXB-2375:  In some cases, XtraBackup will write the wrong binlog filename, pos, and GTID combination info in xtrabackup_binlog_info.

PXB-2274: XtraBackup prepare fails with the wrong LSN message when there are DML statements running during a backup stage. So, it affected all backups with the above case.

PT-1919:  Running a pt-osc on a table that has trigger/s with alter-foreign-keys-method drop_swap mode (or auto mode which could choose drop swap) will delete some trigger/s.

This case does not have any workaround, upgrade the PMM version to 2.16.0 to avoid this issue.

PMM-7464: NGINX misconfiguration like client_max_body_size is set to 10m which is much higher than the buffer size resulting in frequent messages in nginx log with pmm-agent push mode.

PMM-4665: Frequent error messages in pmm-agent.log for components like tokudb storage engine which are not supported by upstream MySQL. As a result, it increases the overall log file size due to these additional messages.

Whether it’s enabling developers or DBAs to realize value faster with tools, advice, and guidance, or making sure applications can scale and handle peak loads, Percona is here to help.