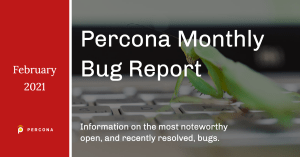 Here at Percona, we operate on the premise that full-transparency makes a product better. We strive to build the best open-source database products, but also to help you manage any issues that arise in any of the databases that we support. And, in true open-source form, report back on any issues or bugs you might encounter along the way.

In this February 2021 edition of our monthly bug report, we have the following list of bugs:

PS-7567: When enforce_storage_engine = InnoDB is set and a minor version upgrade performed, you can no longer view system and status variables.

enforce_storage_engine option is only available in Percona Server, so the bug only applicable to Percona Server. SHOW VARIABLES and SHOW STATUS both affected due to engine change of Performance_schema tables.

MySQL#102586:  When doing a multiple-table DELETE that is anticipating a foreign key ON DELETE CASCADE, the statements work on the primary but it breaks row-based replication.

MySQL#102175:  When the server is under heavy write operation, binary_log_position of gitid_executed shown in PS.log_status table doesn’t match with the position of that gitd shown in the binary log file. The impact of this bug is, It could break replication when using this GTID position information to start replication.

PS-7498(MySQL#102647): Replica sql_thread getting stuck due to MASTER_DELAY. The replication applier thread in a multi-threaded replica can randomly get stuck in the “Waiting until MASTER_DELAY seconds after master executed event” state and doesn’t apply any transaction for a long time when the replica is configured with MASTER_DELAY.

In Percona Server we fixed this issue and the fix will be available in the next release.

Have open source expertise you want to share? Submit your talk for Percona Live ONLINE 2021!

PXC-3455: When binlog disabled (skip-log-bin = 1) on the PXC node it crashes when a table with composite keys queried by SHOW INDEXES.

PXB-2375:  In some cases, XtraBackup will write the wrong binlog filename, pos, and GTID combination info in xtrabackup_binlog_info.

PXB-2274: XtraBackup prepare fails with the wrong LSN message when there are DML statements running during a backup stage.

PT-1914: When using pt-osc on a table that has a column with the ‘Generated’ word in the column comment then it will remove all data in some columns.

PT-1919:  Running a pt-osc on a table that has trigger/s with alter-foreign-keys-method drop_swap mode (or auto mode which could choose drop swap) will delete some trigger/s.

PMM-4665: Frequent error messages in pmm-agent.log for components like tokudb storage engine which are not supported by upstream MySQL instance.

Whether it’s enabling developers or DBAs to realize value faster with tools, advice, and guidance, or making sure applications can scale and handle peak loads, Percona is here to help.