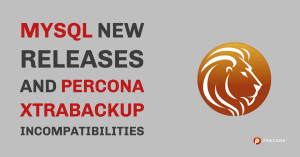 Earlier this week, Oracle released their Q4 releases series. As on the previous releases, backward compatibility has been broken with previous versions of the server. This time on both MySQL 5.7 and 8.0:

While our QA team was performing an extensive test on it,  we found out this version introduced a new compression format version. This change breaks backward compatibility with older versions of MySQL, which is expected on the 8.0 series but is not on 5.7. As Percona XtraBackup (PXB) is based on MySQL code, it makes MySQL 5.7.32 incompatible with current versions of Percona XtraBackup 2.4.20 and prior.

The issue does not affect only Percona XtraBackup but also prevents users from downgrading the server from 5.7.32 to any lower version on the 5.7 series – More details at https://bugs.mysql.com/bug.php?id=101266.

In summary, if you have tables with compression flag as below:

At this moment, we advise users using compressed tables to hold the upgrade to 5.7.32.

We are currently working on making Percona XtraBackup 2.4.21 fully compatible with 5.7.32.

Percona XtraBackup 8.0.14 (the latest version available) is not compatible with MySQL 8.0.22 due to disk format changes introduced in the 8.0.22 release.

WL#13782: InnoDB: Add dynamic config option to use fallocate() on Linux introduced a new redo log record MLOG_FILE_EXTEND which is written on the file extension and doesn’t depend on –innodb-extend-and-initialize option. Unfortunately this time, the redo log format version is not bumped up. Percona XtraBackup 8.0.14 during backup, cannot parse this new redo log record and so backup fails.

If by chance, MLOG_FILE_EXTEND is checkpointed, PXB during backup doesn’t see this new record. This leads to a misleading successful backup that cannot be prepared. Let’s see why.

Bug#31587625: PERFORMANCE DEGRADATION AFTER WL14073
This bug fix in 8.0.22, increased the DD version to 8022. PXB during prepare, de-serializes the SDI from IBD file to bootstrap dictionary. Due to the higher DD_VERSION in SDI, PXB 8.0.14 cannot deserialize the SDI and prepare fails.

We are working on these incompatible issues, look out for an upcoming release of PXB release to take successful, consistent backups of 8.0.22

Satya works with Percona Server Engineering team. He is responsible for Percona Server features, bug fixes, etc. He has an overall experience of 12 years in MySQL. He joined Percona in 2018. Before joining Percona, Satya worked with the InnoDB Development team at Oracle for 6 years. He has good knowledge of InnoDB internals and the new Data Dictionary. Loves to do C++ coding and write algorithms.