Q & A on Webinar “Converting MongoDB to Percona Server for MongoDB” 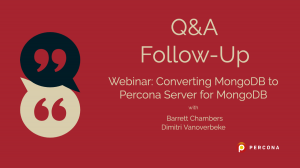 We had great attendance, questions, and feedback from our “Converting MongoDB to Percona Server for MongoDB” webinar which was recorded and can be viewed here. Without further ado, here are your questions and their responses.

Q: What is the recommended path to go from MongoDB Community 3.4 (no Percona) to Percona for MongoDB 4.2?

We would recommend upgrading on Community version from 3.4 -> 3.6 -> 4.0 -> 4.2 with testing and validation at each major version milestone. Once you are on Community 4.2, you can upgrade to Percona Server for MongoDB 4.2. Because PSMDB is a true drop-in replacement you can really do this at any point, but I would do it separately from a major version upgrade.

Q: How does migration work when replica is configured to use “requireSSL”?

Migration works exactly the same as the steps described in the webinar. SSL connections are part of MongoDB Community, so they function identically in Percona Server for MongoDB.

Q: What about migrating encrypted instances to Percona? I guess we need to do initial sync from scratch.

Yes, that is correct. Because encryption affects the way data is stored, full syncs are required. Nodes can be added to an existing enterprise replica set for a close to zero downtime migration.

Q: Do you have any benchmark details with encryption version of Percona?

We have not published any benchmarks for this. However, by default, Percona Server for MongoDB uses the AES256-CBC cipher mode. If you want to use the AES256-GCM cipher mode, then use the encryptionCipherMode parameter to change it. In general, CBC and GCM cipher modes work differently. CBC is faster and GCM is safer (compared to each other). I found some interesting discussion and benchmark here: https://kazoo.ga/quick-benchmark-cbc-vs-gcm/.

Q: Is there any difference in storage of the data between MongoDB vs Percona?

No. They both utilize the same storage engines. WiredTiger is the default. If you’re interested in exploring MMAP, I suggest this blog post MongoDB Engines: MMAPV1 Vs WiredTiger.

Q: Can you migrate from Enterprise Advanced to Percona?

Yes. This is another migration option if the database can tolerate downtime. The methods in our webinar are designed to limit downtime as much as possible.

Q: How does PMM integrate with the mongo replica set? How do you configure backups? Is it in PMM or a separate process?

Yes, PMM has dashboards and metrics for MongoDB replica sets. Our backup solutions are managed outside of Percona Monitoring and Management at this time, so it would be considered a separate process. Our backups are designed to be run on the MongoDB nodes themselves, so no additional middleware is required for their functionality. PMM should be installed on a separate server as it can potentially be storing, ingesting, and displaying a significant amount of data depending upon the size of your MongoDB deployment. View a free demo of Percona Monitoring and Management.

Yes, MongoDB drivers are compatible with Percona Server for MongoDB. Percona designs its software to be fully compatible with upstream. From an application or connectivity perspective, they are identical.

We would recommend upgrading from 3.4 -> 3.6 -> 4.0 – 4.2 with testing and validation between each major version upgrade. Be sure to research compatibility changes, test, validate, and have tested rollback plans.

Q: Which tools we can use for backup in Percona? Same as Mongo community edition or different?

Percona Server for MongoDB supports all backup methods supported by the Community edition – for example, mongodump. We also have our own backup tool called Percona Backup for MongoDB that supports cluster-wide consistent backups of Sharded Clusters and ReplicaSets.

Thanks to everyone who attended. If you have any feedback or ideas on future MongoDB workshops, please let us know.