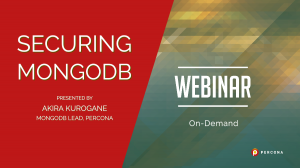 MongoDB, like most any other commercial database you might care to name, has these five security subsystems:

In this on-demand webinar, you’ll first learn which threat each of the subsystems addresses. Second, you’ll learn which parts probably differ, by convention, to other databases you know. And lastly, you’ll receive some practical “where” and “how” on enabling them, as well as the different options/levels in each.