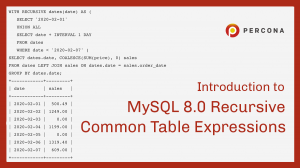 This is the second part of a two-articles series. In the first part, we introduced the Common Table Expression (CTE), a new feature available on MySQL 8.0 as well as Percona Server for MySQL 8.0. In this article, we’ll present the Recursive Common Table Expression. SQL is generally poor at recursive structures, but it is now possible on MySQL to write recursive queries. Before MySQL 8.0, recursion was possible only by creating stored routines.

What is a Recursive Common Table Expression?

A recursive CTE is one having a subquery that refers to its own name. It is particularly useful in the following cases:

Let’s see the main components of a recursive CTE. The following is the syntax to create it:

First of all, the clause RECURSIVE is mandatory, and then there are two mandatory components. The seed member is the initial query, the one that will be executed at the first iteration. The recursive member is the query containing the reference to the same CTE name. This second component will generate all the remaining items of the main query.

The process stops when an iteration does not generate any rows. Be aware of that in order to avoid generating a lot of iterations that can exhaust the memory.

It is important for recursive CTEs that the recursive member includes a condition to terminate the recursion. As a development technique you can force termination by placing a limit on execution time:

First, create a simple series of integer numbers from 1 to 10. This a one-level sequence because the N+1 value is a function of the previous one N only.

Another typical example is calculating the factorial.

In this case, we would like to create a two-level sequence where the N+2 value is a function of the two previous values N+1 and N.

The typical example here is the Fibonacci Series; each number is the sum of the two preceding ones, starting from 0 and 1.  Let’s calculate the first 20 items of the Fibonacci series.