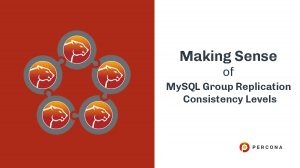 From the initial release, one of the biggest complaints I had about Group Replication is that it allowed “stale” reads and there was no way to prevent them or to even know that you read “stale” data. That was a huge limitation. Thankfully, Oracle released features to control the consistency levels, and it was exactly a year ago! I don’t know about you, but I personally was confused by naming it group_replication_consistency=’AFTER’ or ‘BEFORE’.

So now I want to try to make sense of it and share my understanding (even if it is one year later).

We will start with the default group_replication_consistency=’EVENTUAL’ and work from there. So let’s consider a very simple table:

With over 10mln rows:

And we will do a very simple action. On Node 1 we will update the table and on Node 2 we will read data.

And immediately after that on the Node 2:

There are a few points to note:

How can we get a better outcome:

And after this, on Node 2 (with set session group_replication_consistency=’BEFORE’;):

So there are very notable changes:

This mode allowed us to do exactly what we wanted – prevent stale reads. Great outcome! So what about group_replication_consistency=’AFTER’ ?

After that, Node 2 (in group_replication_consistency=’EVENTUAL’):

Here the situation is different. Now the execution time on Node 1 doubled, as the transaction waits to be committed on all nodes and after that on Node 2 the execution is immediate.

This mode still avoids “stale” reads, but in this case, we shifted the wait time from Node 2 to Node 1, and this is how we can view the difference between ‘BEFORE’ and ‘AFTER’ consistency modes in Group Replication.

Both modes provide a consistent view, but:

So which mode to choose? Actually I think it is good to have an option here. You can choose, if you want, to put wait time on your readers or on your writers; the decision is up to how your application is designed.