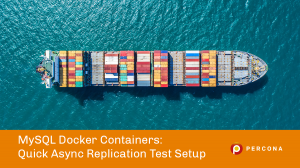 This blog discusses a few concepts about Docker and how we can use it to run a MySQL async replication environment. Docker is a tool designed to make it easier for developers and sysadmins to create/develop, configure, and run applications with containers. The container allows us to package all parts of the application it needs, such as libraries, dependencies like code, configurations, and runtime engine. Docker runtime containers are platform-independent so the package created can be shipped one platform to another platform.

Custom Network Instead of the Default

First, I will create a network that my docker instances will use. I will be using a user-defined network instead of the default one. It is recommended to use the user-defined bridge networks to control which containers can communicate with each other. Docket daemon automatically takes care of DNS name resolution. By creating your own network, every single container using that network will have DNS resolution automagically.

Storage for Persisting the Data

The second step is to provision the storage which my docker instances will be using. In docker, storage can be provisioned in two ways, by using a bind mount or by using a docker volume. Bind mounts are dependent on the directory structure of the host machine while docker volumes are completely managed by Docker. In my example, I am using bind mounts for the primary instance and docker volumes for the replica to illustrate how either of these options can be used.

Configuration File for the Primary Instance

I will proceed with the creation of the configuration file which my primary instance will be using.

In the fourth step, we will provision the primary instance. The docker run command will download the latest percona server image if the image does not already exist in the local repository. In this example, we already have the downloaded image so the docker run does not need to download it again.

I intend to set up an async replication environment, so I will get the binary log details from the primary instance.

For setting the replication we need a user and the below command connects the primary instance and grants the privilege.

Configuration File for the Replica Instance

Create a custom MySQL configuration file for the replica instance.

The next step is to set up a replica instance using the docker volume that I created above.

To set up the replication, apply the change master command in the replica instance and start the replica.