Prometheus 2 time series database (TSDB) is an amazing piece of engineering, offering a dramatic improvement compared to “v2” storage in Prometheus 1 in terms of ingest performance, query performance and resource use efficiency. As we’ve been adopting Prometheus 2 in Percona Monitoring and Management (PMM), I had a chance to look into the performance of Prometheus 2 TSDB. This blog post details my observations.

For someone who has spent their career working with general purpose databases, the typical workload of Prometheus is quite interesting. The ingest rate tends to remain very stable: typically, devices you monitor will send approximately the same amount of metrics all the time, and infrastructure tends to change relatively slowly.

Queries to the data can come from multiple sources. Some of them, such as alerting, tend to be very stable and predictable too. Others, such as users exploring data, can be spiky, though it is not common for this to be largest part of the load.

In my assessment, I focused on handling an ingest workload. I had deployed Prometheus 2.3.2 compiled with Go 1.10.1 (as part of PMM 1.14)  on Linode using this StackScript.  For a maximally realistic load generation, I spin up multiple MySQL nodes running some real workloads (Sysbench TPC-C Test) , with each emulating 10 Nodes running MySQL and Linux using this StackScript

The observations below are based on a Linode instance with eight virtual cores and 32GB of memory, running  20 load driving simulating the monitoring of 200 MySQL instances. Or, in Prometheus Terms, some 800 targets; 440 scrapes/sec 380K samples ingested per second and 1.7M of active time series.

The conventional approach of traditional databases, and the approach that Prometheus 1.x used, is to limit amount of memory. If this amount of memory is not enough to handle the load, you will have high latency and some queries (or scrapes) will fail. Prometheus 2 memory usage instead is configured by storage.tsdb.min-block-duration   which determines how long samples will be stored in memory before they are flushed (the default being 2h). How much memory it requires will depend on the number of time series, the number of labels you have, and your scrape frequency in addition to the raw ingest rate. On disk, Prometheus tends to use about three bytes per sample. Memory requirements, though, will be significantly higher.

While the configuration knob exists to change the head block size, tuning this by users is discouraged. So you’re limited to providing Prometheus 2 with as much memory as it needs for your workload.

If there is not enough memory for Prometheus to handle your ingest rate, then it will crash with out of memory error message or will be killed by OOM killer.

Adding more swap space as a “backup” in case Prometheus runs out of RAM does not seem to work as using swap space causes a dramatic memory usage explosion. I suspect swapping does not play well with Go garbage collection.

Another interesting design choice is aligning block flushes to specific times, rather than to time since start:

As you can see from this graph, flushes happen every two hours, on the clock. If you change min-block-duration  to 1h, these flushes will happen every hour at 30 minutes past the hour.

(If you want to see this and other graphs for your Prometheus Installation you can use this Dashboard. It has been designed for PMM but can work for any Prometheus installation with little adjustments.)

While the active block—called head block— is kept in memory, blocks containing older blocks are accessed through mmap()  This eliminates the need to configure cache separately, but also means you need to allocate plenty of memory for OS Cache if you want to query data older than fits in the head block.

It also means the virtual memory you will see Prometheus 2 using will get very high: do not let it worry you.

Another interesting design choice is WAL configuration. As you can see in the storage documentation, Prometheus protects from data loss during a crash by having WAL log. The exact durability guarantees, though, are not clearly described. As of Prometheus 2.3.2, Prometheus flushes the WAL log every 10 seconds, and this value is not user configurable.

Prometheus TSDB is designed somewhat similar to the LSM storage engines – the head block is flushed to disk periodically, while at the same time, compactions to merge a few blocks together are performed to avoid need to scan too many blocks for queries

Here is the number of data blocks I observed on my system after a 24h workload:

If you want more details about storage, you can check out the meta.json file which has additional information about the blocks you have, and how they came about.

Compactions in Prometheus are triggered at the time the head block is flushed, and several compactions may be performed at these intervals:

Compactions do not seem to be throttled in any way, causing huge spikes of disk IO usage when they run:

And a spike in CPU usage:

This, of course, can cause negative impact to the system performance. This is also why it is one of the greatest questions in LSM engines: how to run compactions to maintain great query performance, but not cause too much overhead.

Memory utilization as it relates to the compaction process is also interesting:

We can see after compaction a lot of memory changes from “Cached”  to “Free”, meaning potentially valuable data is washed out from memory. I wonder if fadvice() or other techniques to minimize data washout from cache are in use, or if this is caused by the fact that the blocks which were cached are destroyed by the compaction process

Crash recovery from the log file takes time, though it is reasonable. For an ingest rate of about 1 mil samples/sec, I observed some 25 minutes recovery time on SSD storage:

The problem I observed with recovery is that it is very memory intensive. While the server may be capable of handling the normal load with memory to spare if it crashes, it may not be able to ever recover due to running out of memory.  The only solution I found for this is to disable scraping, let it perform crash recovery, and then restarting the server with scraping enabled

Another behavior to keep in mind is the need for warmup – a lower performance/higher resource usage ratio immediately after start. In some—but not all—starts I can observe significantly higher initial CPU and memory usage

The gaps in the memory utilization graph show that Prometheus is not initially able to perform all the scrapes configured, and as such some data is lost.

I have not profiled what exactly causes this extensive CPU and memory consumption. I suspect these might be happening when new time series entries are created, at head block, and at high rate.

Besides compaction—which is quite heavy on the Disk IO—I also can observe significant CPU spikes about every 2 minutes. These are longer with a higher ingest ratio. These seem to be caused by Go Garbage Collection during these spikes: at least some CPU cores are completely saturated

These spikes are not just cosmetic. It looks like when these spikes happen, the Prometheus internal /metrics endpoint becomes unresponsive, thus producing data gaps during the exact time that the spikes occur:

We can also see the Prometheus Exporter hitting a one second timeout:

We can observe this correlates with garbage collection: 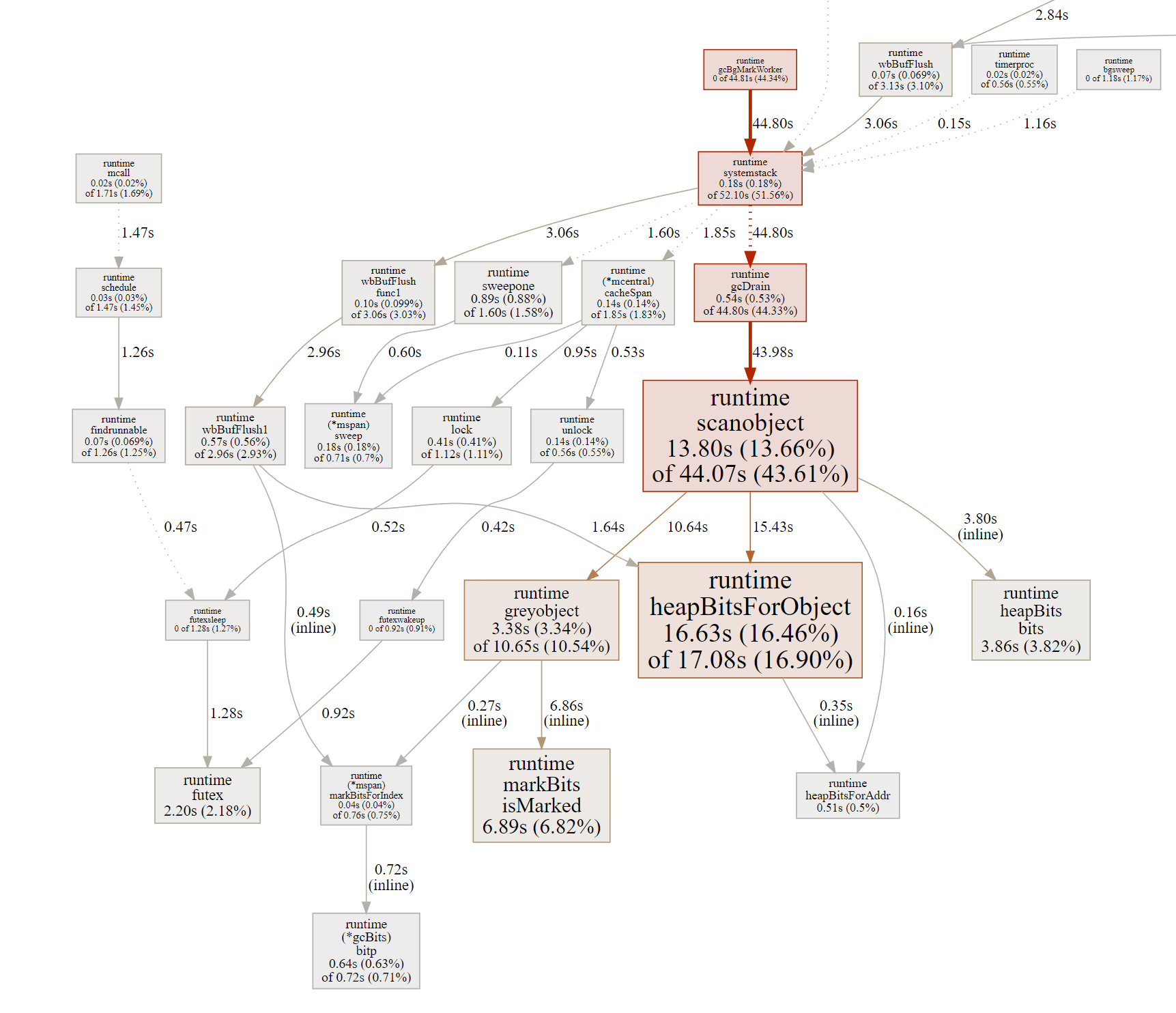 Prometheus 2 TSDB offers impressive performance, being able to handle a cardinality of millions of time series, and also to handle hundreds of thousands of samples ingested per second on rather modest hardware. CPU and disk IO usage are both very impressive. I got up to 200K/metrics/sec per used CPU core!

For capacity planning purposes you need to ensure that you have plenty of memory available, and it needs to be real RAM. The actual amount of memory I observed was about 5GB per 100K/samples/sec ingest rate, which with additional space for OS cache, makes it 8GB or so.

There is work that remains to be done to avoid CPU and IO usage spikes, though this is not unexpected considering how young Prometheus 2 TSDB is – if we look at InnoDB, TokuDB, RocksDB, WiredTiger all of them had similar problem in their initial releases.