There are already some results available from Amazon itself: https://d0.awsstatic.com/product-marketing/Aurora/RDS_Aurora_Performance_Assessment_Benchmarking_v1-2.pdf.

There are also some from Marco Tusa: http://www.tusacentral.net/joomla/index.php/mysql-blogs/175-aws-aurora-benchmarking-blast-or-splash.html.

Amazon used quite a small dataset in their benchmark: 250 tables, with 25000 rows each, which in my calculation corresponds to 4.5GB worth of data. For this datasize, Amazon used r3.8xlarge instances, which provided 32 virtual CPUs and 244GB of memory. So I can’t say their benchmark is particularly illustrative, as all the data fits nicely into the available memory.

In my benchmark, I wanted to try different datasizes, and also compare Amazon Aurora with Percona Server 5.6 in identical cloud instances.

You can find my full report there: http://benchmark-docs.readthedocs.org/en/latest/benchmarks/aurora-sysbench-201511.html

Below is a short description of the benchmark:

Instance Sizes
It is actually very complicated to find an equal configuration (in both performance and price aspects) to use as a comparison between Percona Server running on an EC2 instance and Amazon Aurora.

For the storage we will use 3 options:

More graphs, including timelines, are available by the link http://benchmark-docs.readthedocs.org/en/latest/benchmarks/aurora-sysbench-201511.html 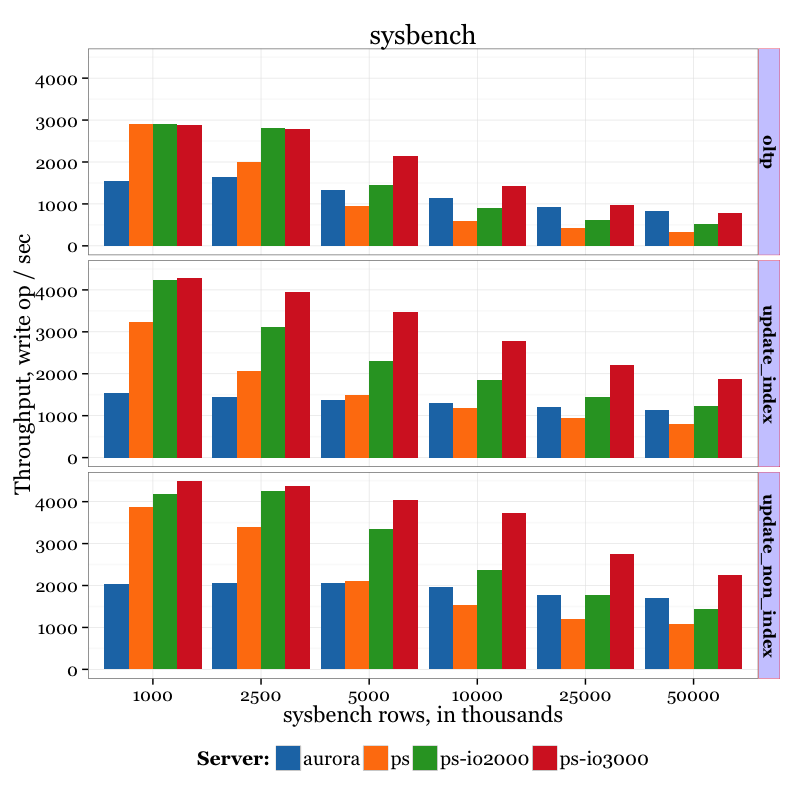 Observations
There are few important points to highlight: