WHAT IF… The User Exists on the Replica and Not in the Primary? (Or Any Other Objects?) 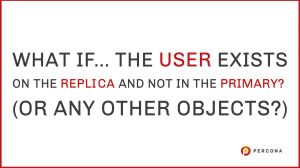 This blog is straightforward but, at the same time, handy. At Percona, we know that the audience of our blogs is not limited to DBAs but includes a broader range of IT professionals, such as sysadmins, help desk employees, NOC operators, and developers as well.

Sometimes people (and also some DBAs, why not?) may accidentally and unintentionally execute supposedly innocuous commands which do not involve data manipulation, but can and do break the replication.

At Percona Managed Services, we see this type of situation more often than one would expect, believe me.

Suppose we have the following topology

PS8_Primary is a primary server, with Percona Server for MySQL 8.0.29 installed, in Read-Write mode

PS8_Primary is a replica server, with Percona Server for MySQL 8.0.29 installed, in Read-Only mode (but NOT Super Read Only!) and zero lag.

Below is a typical example of what I just mentioned. The user (whatever their role is) runs this command on the primary, and it works: the user is going to create the ‘foo‘ user with read-only privileges:

Then you realize that the following error occurs in the replica:

Replication is failing due to the user’s existence.

Now, you may be wondering: how could this have happened? Let’s explore a few possible options:

And that’s what happened:

The user existed in the replica! It explains the error.

What’s done is done. How do we solve it?

The below links may help you:

How To Fix MySQL Replication After an Incompatible DDL Command

We can also use the pt-slave-restart utility to sort out this error.  This is an example

Personally, I do not recommend any of the three methods or scenarios mentioned above.  I would prefer to do the following instead:

Based on that, we can:

Funnily enough, the opposite could happen: some people delete a user on the primary instance, and it doesn’t exist on the replica. In this case, it would be very similar.

Let’s prevent this. How? Using the EXISTS clause.

For the DROP USER case:

And now, as you can see, we don’t have any errors on the replica:

Below I will list most of the commands that are usually executed (in the first column), and how to make them failsafe (in the second column).

(Surprisingly, it has not only the EXISTS clause, but REPLACE as well.)

Next time, consider using these options in the DROP or CREATE commands. It will help ensure you’re doing the right thing for the primary database instance and don’t break the replication.

Be clever, be simple, but above all, be careful.