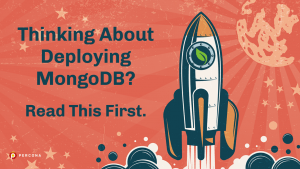 Are you thinking about deploying MongoDB? Is it the right choice for you?

Choosing a database is an important step when designing an application. A wrong choice can have a negative impact on your organization in terms of development and maintenance. Also, the wrong choice can lead to poor performance.

Generally speaking, any kind of database can manage any kind of workload, but any database has specific workloads that fit better than others.

You don’t have to consider MongoDB just because it’s cool and there’s already a lot of companies using it. You need to understand if it fits properly with your workload and expectations. So, choose the right tool for the job.

In this article, we are going to discuss a few things you need to know before choosing and deploying MongoDB.

The basic component of a MongoDB database is a JSON-style document. Technically it is BSON, which contains some extra datatypes (eg. datetime) that aren’t legit JSON.

JSON-style documents are widely used by a lot of programmers worldwide to implement web services, applications, and exchange data. Having a database that is able to manage that data natively is really effective.

MongoDB is often appreciated by developers because they can start using it without having specific knowledge about database administration and design and without studying a complex query language. Indeed, the MongoDB query language is also represented by JSON documents.

The developers can create, save, retrieve, and update their JSON-style documents at ease. Great! This leads usually to a significant reduction in development time.

You know that a relational schema needs a predefined and fixed structure for the tables. Any time you add or change a column you need to run a DDL query and additional time is necessary to also change your application code to manage the new structure. In the case of a massive change that requires multiple column changes and/or the creation of new tables, the application changes could be impressive. MongoDB’s lack of schema enforcement means none of that is required. You just insert a document in a collection and that’s all. Let suppose that you have a collection with user data. If at some point you need to add for example the new “date_of_birth” field, you simply start to insert the new JSON documents with the additional field. That’s all. No need to change anything on the schema.

You can insert into the same collection even completely different JSON documents, representing different entities. Well, this is technically feasible, but not recommended, anyway.

MongoDB greatly shortens the cycle of application development for a non-technology reason – it removes the need to coordinate a schema change migration project with the DBA team. There is no need to wait until the DBA team does a QA dress-rehearsal and then the production release (with rollback plans) that, often as not, requires some production downtime.

MongoDB Has No Foreign Keys, Stored Procedures, or Triggers. Joins Are Supported, but Untypical.

The database design requires SQL queries to be able to join multiple tables on specific fields. Also, the database design may require foreign keys for assuring the consistency of the data and for running automatic changes on semantically connected fields.

What about stored procedures? They can be useful to embed into the database some application logic to simplify some tasks or to improve the security.

And what about triggers? They are useful to automatically “trigger” changes on the data based on specific events, like adding/changing/deleting a row. They help to manage the consistency of the data and, in some cases, to simplify the application code.

Well, none of them is available on MongoDB. So, be aware of that.

Note: to be honest, there’s an aggregation stage that can implement the same of a LEFT JOIN, but this is the only case.

How to survive without JOIN?

Managing JOINs must be done on your application code. If you need to join two collections, you need to read the first one, selects the join field and use it for querying the second collection, and so on. Well, this seems to be expensive in terms of application development, and also this could lead to more queries executed. Indeed it is, but the good news is that in many cases you don’t have to manage the joins at all.

Remember that MongoDB is a schemaless database; it doesn’t require normalization. If you are able to properly design your collections, you can embed and duplicate data into a single collection without the need of creating an additional collection. This way you won’t need to run any join because all the data you need is already into one collection only.

Foreign keys are not available, but as long as you can embed multiple documents into the same collection, you don’t really need them.

If you have a lot of collections with referenced fields, you have to implement in your code a lot of joins or you have to do a lot of checks to assure consistency. This is possible but at a higher cost in terms of development. MongoDB could be the wrong choice in such a case.

MongoDB Replication and Sharding Are Easy to Deploy

MongoDB was natively designed not as a standalone application. It was designed instead to be a piece of a larger puzzle. A mongod server is able to work together with other mongod instances in order to implement replication and sharding efficiently and without the need for any additional third-party tool.

A Replica Set is a group of mongod processes that maintain the same data set. Replica sets provide redundancy and high availability by design. With caveats regarding potentially stale data, you also get read scalability for free. It should be the basis for all production deployments.

The Sharding Cluster is deployed as a group of several Replica Sets with the capability to split and distribute the data evenly on them. The Sharding Cluster provides write scalability in addition to redundancy, high availability, and read scalability. The sharding topology is suitable for the deployment of very large data sets. The number of shards you can add is, in theory, unlimited.

Both the topologies can be upgraded at any time by adding more servers and shards. More importantly, no changes are required for the application since each topology is completely transparent from the application perspective.

Finally, the deployment of such topologies is straightforward. Well, you need to spend some time in the beginning to understand a few basic concepts, but then, in a matter of a few hours, you can deploy even a very large sharded cluster. In the case of several servers, instead of doing everything manually, you can automatize a lot of things using Ansible playbooks or other similar tools.

MongoDB Has Indexes and They Are Really Important

MongoDB allows you to create indexes on the JSON document’s fields. Indexes are used the same way as a relational database. They are useful to solve queries faster and to decrease the usage of machine resources: memory, CPU time, and disk IOPS.

You should create all the indexes that will help any of the regularly executed queries, updates, or deletes from your application.

MongoDB has a really advanced indexing capability. It provides TLL indexes, GEO Spatial indexes, indexes on array elements, partial and sparse indexes. If you need more details about the available index types, you can take a look at the following articles:

Create all the indexes you need for your collections. They will help you a lot to improve the overall performance of your database.

MongoDB is memory intensive; it needs a lot. This is the same for many other databases. Memory is the most important resource, most of the time.

MongoDB uses the RAM for caching the most frequently and recently accessed data and indexes. The larger this cache, the better the overall performance will be, because MongoDB will be able to retrieve a lot of data faster. Also, MongoDB writes are only committed to memory before client confirmation is returned, at least by default. Writes to disk are done asynchronously – first to the journal file (typically within 50ms), and later into the normal data files (once per min).

Other than using the WTCache, MongoDB relies on the OS file system caches for accessing the disk pages. This is another important optimization, and significant memory may be required also for that.

In the end, be prepared to provide enough memory to MongoDB.

But how much memory should I need? The rule of thumb is evaluating the “working set” size.

The “working set” is the amount of data that is most frequently requested by your application. Usually, an application needs a limited amount of data, it doesn’t need to read the entire data set during normal operations. For example, in the case of time-series data, most probably you need to read only the last few hours or the last few day’s entries. Only on a few occasions will you need to read legacy data. In such a case, your working set is the one that can store just a few days of data.

Let’s suppose your data set is 100GB and you evaluated your working set is around 20%, then you need to provide at least 20GB for the WTCache.

Since MongoDB uses by default 50% of the RAM for the WTCache (we usually suggest not to increase it significantly), you should provide around 40GB of memory in total for your server.

Every case is different and sometimes it could be difficult to evaluate correctly the working set size. Anyway, the main recommendation is that you should spend a significant part of your budget to provide the larger memory you can. For sure, this is will be beneficial for MongoDB.

What Are the Suitable Use Cases for MongoDB?

Actually, a lot. I have seen MongoDB deployed on a wide variety of environments.

For example, MongoDB is suitable for:

We can say that you can use MongoDB basically for everything, it is a general-purpose database. The key point is instead the way you use it.

The best way to use MongoDB is to adhere to a few best practices and modeling the collections keeping in mind some basic rules like embedding documents instead of creating multiple referenced collections.

Percona develops and deploys its own open source version of MongoDB: the Percona Server for MongoDB (PSMDB).

PSMDB is a drop-in replacement for MongoDB Community and it is 100% compatible. The great advantage provided by PSMDB is that you can get enterprise-class features for free, like:

Without PSMDB all these advanced features are available only in the MongoDB Enterprise subscription.

Please take a look at the following links for more details about PSMDB:

Remember you can get in touch with Percona at any time for any details or for getting help.

Let’s have a look at the following list with the more important things you need to check before choosing MongoDB as the backend database for your applications. The three colored flags indicate if MongoDB is a good choice: red means it’s not, orange means it could be a good choice but with some limitations or potential bottlenecks, green means it’s very good.

And finally, remember the following:

Take a look at Percona Server for MongoDB