How to Configure MySQL SSL With Public Certificates 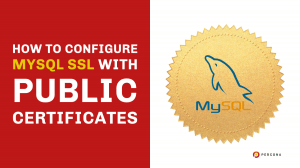 Getting MySQL working with self-signed SSL certificates is pretty simple. Having it working with a certificate signed by a trusted authority is also very simple, we just need to set the correct path and privileges to the file. The problem comes when we need to make MySQL validate the certificate signature against the authority public key.

I’ve searched on the internet but wasn’t able to find much information about it. There are a good number of posts on how to set up your own certificate authority and self-sign your certificates, but not much about how to use one signed by a public trusted authority.

Let’s Encrypt gives us a package with four files, which are:

I tried to connect using MySQL client but without using the certificate given by Let’s Encrypt – and that worked flawlessly. The first problem happened when I tried to validate the server certificate on the client:

I wasn’t expecting to get this error because I was using the exactly same CA certificate used on the server, but the validation failed. I thought that it was an issue on my MySQL server and I tested many configuration changes using the CA certificate (chain1.pem) and using the bundle (fullchain1.pem) for example, but none of them worked. I decided then to debug the issue. At first on MySQL server, but I found the issue wasn’t on the server, at least not this very one. I then went to debug the MySQL client and ended up in the function ssl_handshake_loop[1] which calls the function SSL_connect[2] from the OpenSSL library. At this point, I realized the error was coming from the OpenSSL library!

I recompiled MySQL and the OpenSSL library with debug symbols to be able to use client the “–debug“[3] option on my MySQL client to get some debug messages directly from the client and make it easier to debug. Following the execution path through the MySQL client and OpenSSL library, I found that the OpenSSL was trying to validate the whole CA chain of trust but the CA chain key that Let’s Encrypt gave me didn’t have the full chain of trust. As they explain in their website here[5] under normal circumstances, certificates issued by Let’s Encrypt will come from “R3”, an RSA intermediate which is an intermediate CA. At this point, I only had the certificate of the intermediate CA and OpenSSL was refusing to validate the server certificate without having the whole chain. This was the issue!

The solution was pretty simple. Let’s Encrypt is a publicly trusted certificate authority and all browsers and other tools have an up-to-date file with the chain of publicly trusted CA’s. I downloaded the certificate chain from the curl website[4] and used at the client side to make MySQL client connect to the server:

Now that I understood what was the problem I also used this same CA’s chain certificate on the MySQL server side because if we want to use a certificate on client-side it needs to be validated by the server against the CA chain of trust. The error would be similar without using the proper CA’s certificate, for example:

But if we check the error log we can see:

I then used the same CA file:

But it gave me a “certificate verify failed” error. Note that this is not the CA chain validation error anymore but the OpenSSL on the server wasn’t able to validate the certificate:

It was clear that for whatever reason the chain didn’t have CA certificate that Let’s Encrypt used to sign. I then just added it to the chain: