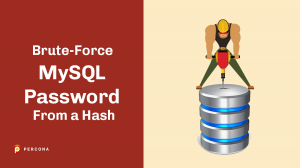 In most cases, MySQL password instructions provide information on changing MySQL user passwords on the production system (e.g., reset root password without restart). It is even recommended to change passwords regularly for security reasons. But still, sometimes DBA duties on legacy systems offer surprises and you need to recover the original password for some old users.

There is no magic: as long as only hashes are stored and not the original passwords, the only way to recover the lost password is to brute force it from the known hash.

Note on Security and mysql-unsha1 Attack

Interestingly, if a hacker has access to password hash and can sniff mysql traffic, he doesn’t need to recover a plain text password from it. It doesn’t matter how strong the password and how strong the hashing algorithm inside the auth plugin, due to MySQL protocol design, sniffed hash is enough to connect to a database with a patched version of MySQL client. It means, if a hacker has access to a database backup and traffic, he automatically receives all needed information (SHAs) for connecting to a running database. See for the attack details.

Still, if you want to have a password that works with an unmodified client, however, you need to do some hacking, see instructions below.

Let’s return to the password recovery. First of all, we need to dump hashes.

MySQL 5.7 uses the mysql_native_password auth plugin by default and we can dump sha1 hashes with the following command.

MySQL 8.0 uses the caching_sha2_password auth plugin by default and we can dump sha256 hashes as follows.

If you need to get the root password hash and don’t have a user who has read access to mysql.user table, you should start mysqld with the --skip-grant-tables option, see the official doc for details.

For password recovery, it is needed to run calculations on some powerful GPUs, and there are not so many cloud providers with GPU instances on the market. Linode is one of the remarkable cloud providers if you need a simple, reliable provider with a really helpful support department. Linode has a powerful CLI tool that simplifies “bash” automation a lot. Also, for more serious automation, the official Terraform provider exists.

The password brute-forcing is done based on dictionaries. We will use a small rockyou dictionary as an example, to show how it goes.

You can find really good dictionaries on the weakpass dot com website.

But it is possible that even the largest dictionary will not be enough for the recovery. In such a case you should check if the validate_password plugin is enabled and prepare a dictionary based on it. Check it as follows:

If the output of this command is empty, it means that the plugin is disabled. You can find some more details about the plugin in one of our previous blog posts about it, Improving MySQL Password Security with Validation Plugin.

The validate_password_policy field is the most important one here. It can have the following values:

In the case of MySQL 8.0, the latest version of hashcat from the master branch should be compiled due to the fact that code from https://github.com/hashcat/hashcat/issues/2305 wasn’t released in any version right now.

Update to the latest software, disable the nouveau driver and reboot:

Install the proprietary driver and reboot

If your password was recovered correctly, you can run the same command with the --show option to display the password.