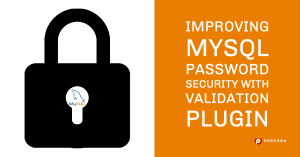 In systems nowadays, improving security is a must! One of the weakest links in the security system is the user password from where an attacker can enter. In order to improve password strength and security, MySQL provides a plugin called “Validation plugin” which can be configured to enforce a set of rules for passwords.

The plugin can be enabled by executing the following at runtime:

Or by adding the plugin in the configuration file, but this requires bouncing MySQL for it to take effect:

It’s also suggested to add the following variable in my.cnf so that the plugin cannot be removed at runtime (also requires a MySQL bounce to take effect):

You can check if the plugin is installed by either checking plugins:

Or by checking if the following variables are enabled in MySQL:

A short summary of the variables that affect the password is:

Validate_password_check_user_name: If enabled, prevents a user from setting a password equal to its username or the reverse of it

Note: After increasing passwords policies, current passwords are not automatically expired and might potentially not fit in the new policy. A password expiration method should be used to force users to set a new password after a fixed number of days or when password policies have changed.

Trying to set the following passwords result in an error:

Password is only accepted if having at least 8 characters, including 1 special character, 1 numeric, 1 lower and 1 uppercase like the following:

The following passwords that include case insensitive string “man1” are not accepted:

But the following password is accepted since it complies with all the requirements:

Each company will have different password requirements depending on their needs and policies, but for some businesses and companies there are already standard in place, such as:

Which can be implemented by setting the following:

Note: The above settings might seem weak as per nowadays standards, but the above settings are minimum to comply with PCI DSS and stronger policies can be used. Also, PCI/DSS has other requirements (which cannot be tackled down by validation plugin) such as password expiration policies, lockdown after 6 failed attempts, and more, and does not rely solely on password strength.

NIST encourages to use more complex passwords, including special characters and dictionaries containing previously breached passwords, dictionary words, repetitive strings and common patterns such as “aaaa” or “1234” which can be fulfilled with the following config:

Having a dictionary file with prohibited words. Since the maximum dictionary size is 1 MB, the number of words and patterns that can exist in the dictionary might be limited to the required implementation of policy, although other measures such as password locking after many failures should also be implemented to comply with NIST.

Compliance with the following configuration:

And having populated the dictionary with all possible combinations of consecutive characters.

The validation plugin can greatly help in enforcing passwords policies for increased system security and can be set up in a fast and easy way, but there should also be other security mechanisms to complement validation plugin such as:

Do I need to install anything before activating this plugin in my system?

Hi trangtriqc! No, you do not need to activate anything prior activating the plugin. Plugin files must be in mysql’s plugin folder (which are by default)