InnoDB Flushing in Action for Percona Server for MySQL 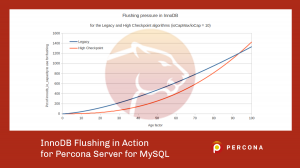 As the second part of the earlier post Give Love to Your SSDs – Reduce innodb_io_capacity_max! we wanted to put together some concepts on how InnoDB flushing works in recent Percona Server for MySQL versions (8.0.x prior to 8.0.19, or 5.7.x). It is important to understand this aspect of InnoDB in order to tune it correctly. This post is a bit long and complex as it goes very deep into some InnoDB internals.

InnoDB internally handles flush operations in the background to remove dirty pages from the buffer pool. A dirty page is a page that is modified in memory but not yet flushed to disk. This is done to lower the write load and the latency of the transactions. Let’s explore the various sources of flushing inside InnoDB.

We already discussed the idle flushing in the previous post mentioned above. When there are no write operations, which means the LSN isn’t moving, InnoDB flushes dirty pages at the innodb_io_capacity rate.

This source of flushing is a slightly modified version of the old InnoDB flushing algorithm used years ago. If you have been around MySQL for a while, you probably don’t like this algorithm. The algorithm is controlled by these variables:

If the ratio of dirty pages over the total number of pages in the buffer pool is higher than the low water mark (lwm), InnoDB flushes pages at a rate proportional to the actual percentage of dirty pages over the value of Innodb_max_dirty_pages_pct multiplied by innodb_io_capacity. If the actual dirty page percentage is higher than Innodb_max_dirty_pages_pct, the flushing rate is capped at innodb_io_capacity.

The main issue with this algorithm is that it is not looking at the right thing. As a result, transaction processing may often freeze for a flush storm because the max checkpoint age is reached. Here’s an example from a post written by Vadmin Tkachenko back in 2011: InnoDB Flushing: a lot of memory and slow disk. 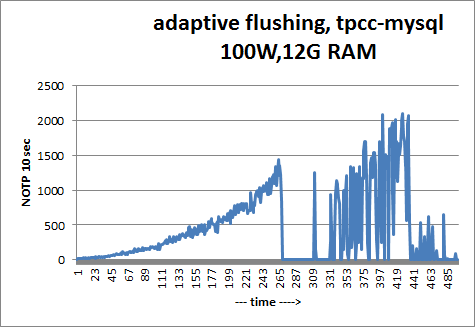 We can see a sharp drop in NOTP (New Order Transaction per second) at time = 265, and that’s because InnoDB reached the maximum checkpoint age and had to furiously flush pages. This is often called a flush storm. These storms freeze the write operations and are extremely bad for the database operation. For more details about flush storms, please see InnoDB Flushing: Theory and solutions.

To speed up reads and page creation, InnoDB tries to always have a certain number of free pages in each buffer pool instance. Without some free pages, InnoDB could need to flush a page to disk before it can load a new one.

This behavior is controlled by another poorly understood variable: innodb_lru_scan_depth. This is a pretty bad name for what the variable controls. Although the name makes sense if you look at the code, for a normal DBA the name should be innodb_free_pages_per_pool_target. At regular intervals, the oldest pages in the LRU list of each buffer pool instance is scanned (hence the name), and pages are freed up to the variable value. If one of these pages is dirty, it will be flushed before it is freed.

The adaptive flushing algorithm was a major improvement to InnoDB and it allowed MySQL to handle much heavier write load in a decent manner. Instead of looking at the number of dirty pages like the old algorithm, the adaptive flushing looks at what matters: the checkpoint age. The first adaptive algorithm that we are aware of came from Yasufumi Kinoshita in 2008 while he was working at Percona. The InnoDB plugin 1.0.4 integrated similar concepts, and eventually Percona removed its flushing algorithm because the upstream one was doing a good job.

The following description is valid for Percona Server for MySQL 8.0.18-. While we were busy writing this post, Oracle released 8.0.19 which introduces significant changes to the adaptive flushing code. It looks like a good opportunity for a follow-up post in the near future…

But let’s first take a small step back to put together some concepts. InnoDB stores rows in pages of normally 16KB. These pages are either on disk, in the data files, or in memory in the InnoDB buffer pool. InnoDB only modifies pages in the buffer pool.

Pages in the buffer pool may be modified by queries, and then they become dirty. At commit, the page modifications are written to the redo log, the InnoDB log files. After the write, the LSN (last sequence number) is increased. The dirty pages are not flushed back to disk immediately and are kept dirty for some time. The delayed page flushing is a common performance hack. The way InnoDB flushes its dirty pages is the focus of this post.

Let’s now consider the structure of the InnoDB Redo Log. 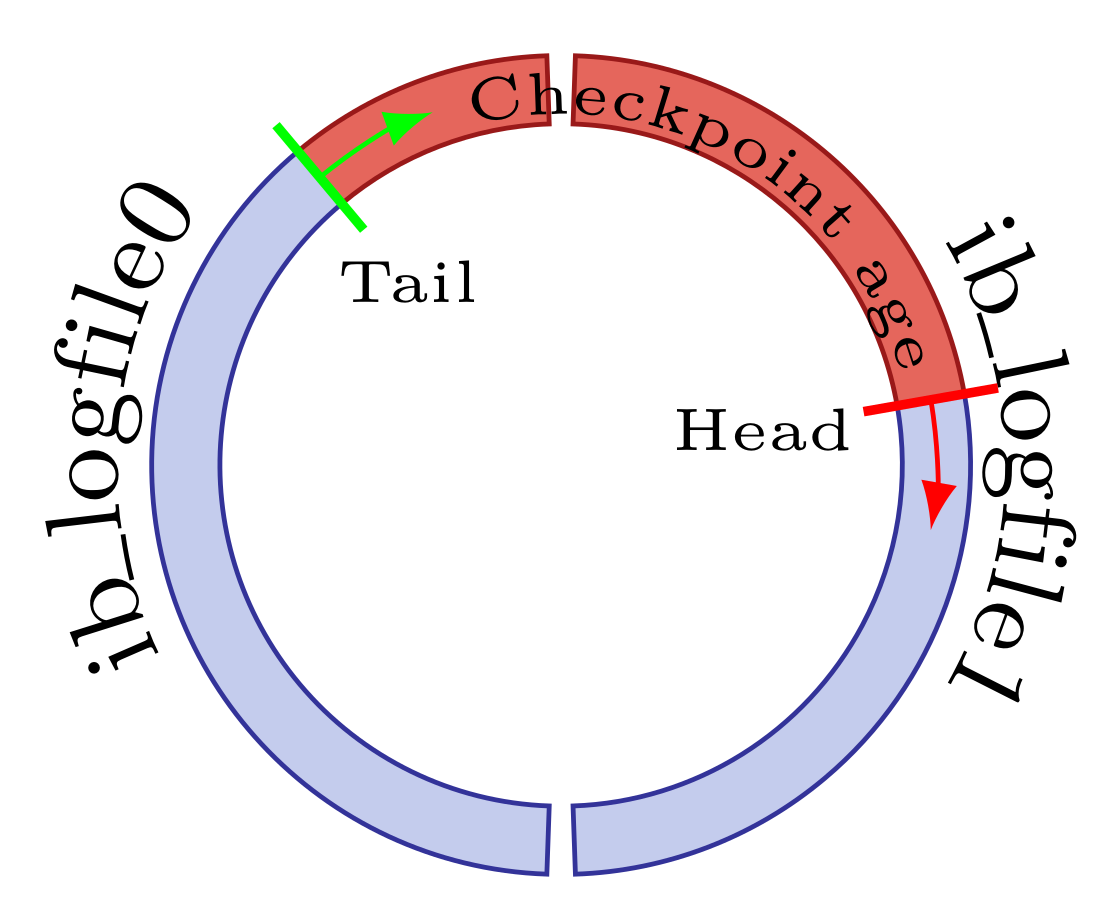 Write transactions are moving the Head forward while page flushing is moving the Tail. If the Head moves too fast and there is less than 12.5% available before the Tail, transactions can no longer commit until some space is freed in the log files. InnoDB reacts by flushing at a high rate, an event called a Flush storm. Needless to say, flush storms should be avoided.

How the Adaptive Flushing Algorithm Works

The adaptive flushing algorithm is controlled by the following variables:

The Legacy algorithm is given below. Notice the power of 3/2 on the age factor and the 7.5 denominator.

It also offers the High Checkpoint algorithm shown below: 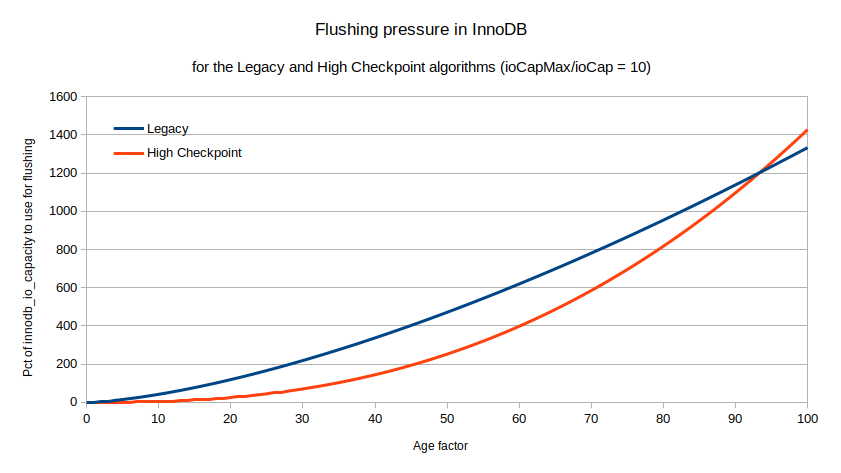 Flushing pressure for the legacy and high-checkpoint algorithm

The graph has been generated for a ratio ioCapMax/ioCap of 10 like with the default values. The Percona High Checkpoint starts slowly but then it increases rapidly. This allows for more dirty pages (see the post we previously discussed) and it is normally good for performance. The returned percentage value can be much higher than 100.

So far, only the checkpoint age was used. While this is good, the goal of the algorithm is to flush pages in a way that the tail of the redo log ring buffer moves at about the same speed at the head. Approximately every innodb_flushing_avg_loops second, the rate of pages flushed and the progression of the head of the redo log is measured and the new value is averaged with the previous one. The goal here is to give some inertia to the algorithm, to damp the changes. A higher value of innodb_flushing_avg_loops makes the algorithm slower to react, while a smaller value makes it more reactive. Let’s call these quantities avgPagesFlushed and avgLsnRate.

Pages to Flush for the avgLsnRate

Based on the avgLsnRate value, InnoDB scans the oldest dirty pages in the buffer pool and calculates the number of pages that are at less than avgLsnRate of the tail. Since this is calculated every second, the number of pages returned is what needs to be flushed to maintain the correct rate. Let’s call this number pagesForLsnRate.

We now have all the parts we need. The actual number of pages that will be flushed is given by:

This quantity is then capped to ioCapMax. As you can see, pctOfIoCapToUse is multiplied by ioCap. If you look back at the equations giving pctOfIoCapToUse, they have ioCap at the denominator. The ioCap cancels out and the adaptive flushing algorithm is thus independent of innodb_io_capacity, as only innodb_io_capacity_max matters. There could also be more pages flushed if innodb_flush_neighbors is set.

Can InnoDB Flush Pages at a Rate Higher Than innodb_io_capacity_max?

Yes, if innodb_flush_sync is ON, InnoDB is authorized to go beyond if the max checkpoint age is reached or almost reached. If set to OFF, you’ll never go beyond innodb_io_capacity_max. If the latency of your read queries is critical, disabling innodb_flush_sync will prevent an IO storm, but at the expense of stalling the writes.

are rather frequent. They basically mean the hardware wasn’t able to flush innodb_io_capacity_max pages per second. In the above example, InnoDB tried to flush 1,438 pages but the spinning disk is able to perform only 360 per second. Thus, the flushing operation which was supposed to take 1 second ended up taking 4 seconds. If you really think the storage is able to deliver the number of write iops stated by innodb_io_capacity_max, then it may be one of these possibilities:

Now that we understand how InnoDB flushes dirty pages to disk, the next obvious step is to tune it. InnoDB tuning will be covered in a follow-up post, so stay tuned.