Give Love to Your SSDs – Reduce innodb_io_capacity_max! 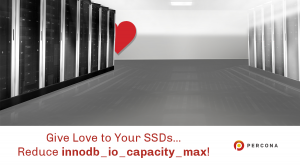 The innodb_io_capacity and innodb_io_capacity_max are often misunderstood InnoDB parameters. As consultants, we see, at least every month, people setting this variable based on the top IO write specifications of their storage. Is this a correct choice? Is it an optimal value for performance? What about the SSD/Flash wear leveling?

Let’s begin with what the manual has to say about innodb_io_capacity:

“The innodb_io_capacity variable defines the number of I/O operations per second (IOPS) available to InnoDB background tasks, such as flushing pages from the buffer pool and merging data from the change buffer.“

What does this mean exactly? Like most database engines, when you update a piece of data inside InnoDB, the update is made in memory and only a short description of the modification is written to the redo log files before the command actually returns. The affected page (or pages) in the buffer pool are marked as dirty. As you write more data, the number of dirty pages will rise, and at some point, they need to be written to disk. This process happens in the background and is called flushing. The innodb_io_capacity defines the rate at which InnoDB will flush pages. To better illustrate, let’s consider the following graph:

Impacts of innodb_io_capacity on idle flushing

What are the pros and cons of having a large number of dirty pages? Are there good reasons to flush them as fast as possible?

If a page stays dirty for a while in the buffer pool, it has the opportunity to receive an additional write before it is flushed to disk. The end result is a deflation of the write load. There are schema and query patterns that are more susceptible to a write load reduction. For example, if you are inserting collected metrics in a table with the following schema:

If there are 20k devices each with 8 metrics, you know there are 160k hot pages. Ideally, these pages shouldn’t be written to disk until they are full, actually half-full since they are part of a mid-inserted b-tree.

Another example is a users table where the last activity time is logged. A typical schema could be:

Often, only a small subset of the users is active at a given time so the same pages will be updated multiple times as the users navigate in the application. To illustrate this behavior, we did a little experiment using the above schema and actively updating a random subset of only 30k rows out of about 6.5M. A more realistic example would require a lab more capable than this old laptop. During the experiment the following settings were used:

For each run, we varied innodb_io_capacity_max and calculated the ratio of updates over page flushed over a duration of 30 minutes. We never reached a furious flushing situation. 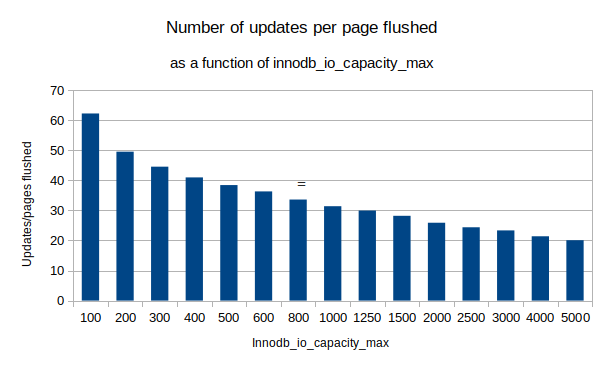 Impacts of Excessive Flushing on Performance

But why is the amount of writes so important and what has it to do with flash devices?

Flash devices are good, we know that, but this performance improvement comes with a downside: endurance. Normally SSDs are capable of doing much less write operations in each sector than regular spinning drives. It all boils down to the way bits are stored using NAND gates. The bits are represented by a voltage level across a set of gates and the slightest deterioration of a gate, as it is cycled between values, affects these voltage levels. Over time, a memory element is no longer reaching the proper voltage. Cheaper flash devices store more bits per set of gates, per storage cells, so they are more affected by the deterioration of voltage levels. SSDs also have more or less spare storage cells to fix broken ones.

Let’s look at the endurance of some SSDs. We chose a few models from the Intel web site mostly because estimate prices are provided.

The endurance is expressed in full write cycles, the number of times the device can be completely overwritten. The endurance is one of the main variables affecting the price. The enterprise-grade SSDs have a higher endurance than the consumer-grade ones. The Optane series is at the high end of the enterprise offering.

Devices like the DC P4610 are fairly common. The specs of the drive in the above table show a total write endurance of 12.25 PB (7,840 full device writes) and the ability to perform 640k read IOPS and about 200k write IOPS. If we assume a server life of five years, this means the average write bandwidth has to be less than:

The Impact of the Filling Factor

So, in theory, you could write at 83MB/sec for five years. This is very high but… it implies an empty device. If there is a static dataset, like old data nobody wants to prune, filling 75% of the SSD, the situation is very different. Now, only 25% of the drive is getting all the writes and those storage cells are cycled much faster. We are down to an average of about 21 MB/sec over five years. That is still a decent bandwidth but it falls into more realistic use cases.

The following figure shows the average write bandwidth needed to reach the SSD endurance specification as a function of the filling factor. With SSDs, if the disks are rather full, it is a good idea to regularly, maybe yearly or every 6 months, wipe out the data and reload it. This process reshuffles the data and helps spread the strain to all the storage cells. If you are using Percona XtraDB Cluster, that amounts at triggering a full SST after deleting the dataset and maybe run fstrim if the filesystem is not mounted with the discard option. 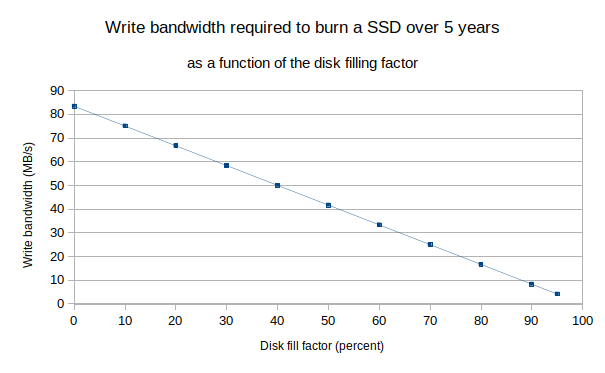 Now, in terms of InnoDB write load, because of things like the doublewrite buffer, the redo log, the undo log, and the binary log, when InnoDB writes a 16KB page to disk, the actual amount of data written is higher, between 32KB and 48KB. This estimate is highly dependent on the schema and workload but as a rough estimate, we can estimate 36KB written per page flushed.

We often see very high values for both innodb_io_capacity and innodb_io_capacity_max, as people look at the specs of their SSDs and set a very high number. Values of many tens of thousands are common; we have even seen more than 100k a few times. Such high values lead to an aggressive InnoDB flushing – way more than needed. There are very few dirty pages in the buffer pool and performance is degraded. The InnoDB checkpoint age value is likely very close to innodb_adaptive_flushing_lwm times the max checkpoint age value.

On a moderately busy server, sustained InnoDB flushing rates of 2000 pages per second can easily be reached. Given our estimate of 36KB written per page flushed, such a flushing rate produces a write bandwidth of 70 MB/s. Looking at the previous figure, if the SSD used has similar specs and is more than 75% filled, it will not last 5 years; rather, likely less than one and a half years.

This post is trying to shed some light on a common problem we are observing much more frequently than we would like. Actually, we are surprised to see a lot of people recommending increasing the IO capacity settings practically out of the box instead of paying attention to some other settings.

So, be nice, keep io_capacity settings as low as you need them – your SSDs will thank you! 🙂