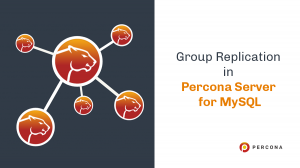 Percona Server for MySQL 8.0.18 ships all functionality to run Group Replication and InnoDB Cluster setups, so I decided to evaluate how it works and how it compares with Percona XtraDB Cluster in some situations.

The first initial logical step is to load data into an empty cluster, so let’s do this with our sysbench-tpcc script.

The resulted dataset is about 100GB.

The time to finish the script is 61 minutes, 19 seconds.

Let’s review how the network was loaded on a secondary node in Group Replication during the execution:

The time to finish the script is 39 minutes, 27 seconds.

The time to finish the script is 43 minutes, 22 seconds.

To see how PXC would perform without network interactions, I loaded data into a one node PXC cluster and it took 36 minutes, 34 seconds.  So there is a minimal network overhead for PXC 5.7 (36 minutes for one node vs 39 minutes for three nodes).

The next experiment I wanted to perform is to see how long it would take for a new node to join the cluster with data loaded in the previous part. The Group Replication supports two methods to catch-up: incremental (loading data from binary logs) and the clone plugin (physical copy of data).

Let’s measure time for a new node to join to catch-up with both methods:

It took 1 hour and 52 minutes for a node to join and apply binary logs.

It might not be obvious, but actually it is possible to have an incremental state transfer for big dataset changes in Percona XtraDB Cluster too, we just need to use a big enough gcache.

For testing purposes, I will set wsrep_provider_options=”gcache.size=150G” to check how long it will take to ship and apply IST in PXC.

In total it took 29 minutes 30 seconds to transfer and apply IST. So it was four times faster to apply IST than to apply binary logs.

I show the full log during the clone process, as it contains interesting information: