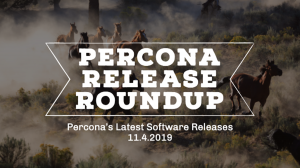 We publish quite a few updates to our software and services every week, so we wanted to make it a little easier for you to keep track of our latest releases. So, starting today we will publish release roundups comprising all the details and information you need on the previous week (or two)’s releases from Percona.

Each roundup will showcase the latest in software updates, tools, and features to help you manage and deploy our software, with highlights and critical information, as well as links to the full release notes and direct links to the software or service itself.

In this release, the license of RPM and DEB packages has been changed from AGPLv3 to SSPL.

Percona Server for MongoDB offers all the features and benefits of MongoDB Community Edition, plus additional enterprise-grade functionality, and can be used on-premises and in the cloud.

Also on October 24, we released Percona Monitoring and Management 1.17.2,  a free and open-source platform for managing and monitoring MySQL, MongoDB, and PostgreSQL performance. It allows deep insight into the performance of applications and databases, both on-premises and in the cloud, and is compatible with major cloud providers such as Amazon Web Services (AWS), Google Cloud, and Microsoft Azure, with specific dashboards for AWS RDS and Amazon Aurora.

PMM 1.17.2 is now based on Grafana 5.4.5. One of the improvements in this release is a substantial size increase for the AMI images, which allows now to reserve space for about 10 instances with 30 days retention. Another improvement is related to the Tooltips for the MySQL InnoDB Compression dashboard, which were updated by describing what the graphs display, along with links to related documentation resources. Besides these improvements, in PMM 1.17.2 we have included 4 improvements and fixed 23 bugs.

Percona Monitoring and Management (PMM) allows deep insight into the performance of applications and databases.

On October 30, Percona Server for MySQL 8.0.17-8 was released. It includes all the features available in MySQL 8.0.17 Community Edition in addition to enterprise-grade features developed by Percona. A new feature is the ability to have a MySQL Utility user who has system access to do administrative tasks but who has limited access to user schemas. This feature is especially useful to those who are operating MySQL as a Service. Percona Server for MySQL 8 has also implemented Data Masking, which provides a set of functions to hide sensitive data with modified content. This release includes fixes to bugs found in previous releases.

Percona Server for MySQL delivers enterprise-grade features for free and is fully compatible with today’s cloud providers such as AWS, Google Cloud, Microsoft Azure, and others, fully deployed in the cloud or as a hybrid solution.

Percona announced the release of Percona Server for MongoDB 4.0.13-7 on October 31. It enables uploading hot backups to an Amazon S3 or compatible storage service, such as MinIO. For this release, this feature has the EXPERIMENTAL status. Also, the license for RPM and DEB packages has been changed from AGPLv3 to SSPL. Percona Server for MongoDB is an enhanced, open source, and highly-scalable database that is a fully-compatible, drop-in replacement for MongoDB 4.0 Community Edition.

On November 4, Percona XtraBackup 2.4.16 was released.  An improvement was added to this release, where two options ( --backup-lock-timeout  and --backup-lock-retry-count ) were added to enable the configuring of the timeout for acquiring metadata locks in FLUSH TABLES WITH READ LOCK, LOCK TABLE FOR BACKUP, and LOCK BINLOG FOR BACKUP statements. (More information in PXB-1914). In addition, several bugs were fixed, including PXB-1902 where Percona XtraBackup was not able to connect to the database when the password was specified along with the transition-key parameter. For a full list of improvements and bug fixes, please visit the release notes page on our website.  Percona XtraBackup tools provide a method of performing a hot backup of your MySQL data while the system is running. It is a free, online, open source, complete database backups solution for all versions of Percona Server for MySQL and MySQL.

Be sure to follow us on Twitter to stay up-to-date on the most recent releases! Percona is a leader in providing best-of-breed enterprise-class support, consulting, managed services, training and software for MySQL, MariaDB, MongoDB, PostgreSQL and other open source databases in on-premises and cloud environments.