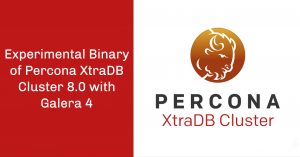 In PXC 5.6 and 5.7, when using xtrabackup-v2 as the SST method, the DBA must create a user with the appropriate privileges for use by Percona XtraBackup (PXB). The username and password of this backup user are specified in the wsrep_sst_auth variable.

This is a problem because this username and password was being stored in plaintext and required that the configuration file be secured.

(This feature is still under development and may change before PXC 8.0 GA)

This password consists of 32 characters generated at random. A new password is generated for each SST request. The plaintext of the password is never saved and never leaves the node. The username/password is sent to the SST script via unnamed pipes (stdin).

The mysql.pxc.internal.session user account provides the appropriate security context to create and set up the other PXC accounts. This account has a limited set of privileges, enough needed to create the mysql.pxc.sst.user  .

This account is locked and cannot be used to login (the password field will not allow login).

The mysql.pxc.sst.user is used by XtraBackup to perform the backup. This account has the full set of privileges needed by XtraBackup.   This account is created for an SST and is dropped at the end of an SST and also when the PXC node is shutdown. The creation/provisioning of this user account is not written to the binlog and is not replicated to other nodes. However, this account is sent with the backup to the joiner node. So the joiner node also has to drop this user after the SST has finished.

The experimental release of PXC is based on MySQL 8.0.15, and we have not implemented the role-based support due to issues found with MySQL 8.0.15. This will be revisited in future versions of PXC 8.0.

As a precaution, the user is also dropped when the server is shutdown.