In the previous blog posts in this series, we’ve covered some of the essential aspects of an Enterprise-grade solution: security, high availability, and backups. Another important aspect is the scalability of the solution: as our application grows how do we accommodate an increase in traffic while maintaining the quality of the service (response time)? The answer to this question depends on the nature of the workload at play but it is often shaped around:

(a) improving its efficiency and
(b) increasing the resources available.

When it comes to improving the efficiency of a database workload, one of the first places we start looking at is the list of slow queries; if the most popular ones can be optimized to run faster then we can easily gain some overall performance back. Arguably, we may look next at the number and frequency of client connections: is the workload composed of a high number of very frequent but short-lived connections? Or are clients connections of a more moderate number, and tend to stick around for longer?

If we consider the first scenario further–a high number of short-lived connections–and that each connection spawns a new OS process, the server may hit a practical limit as to the number of transactions—or connections—it can manage per second, considering the hardware available and the workload being processed. Remember that PostgreSQL is process-based, as opposed to thread-based, which is itself an expensive operation in terms of resources, both CPU and memory.

A possible remedy for this would be the use of a connection pooler, acting as a mediator between the application and the database. The connection pooler keeps a number of connections permanently opened with the database and receives and manages all incoming requests from clients itself, allowing them to temporarily use one of the connections it already has established with PostgreSQL. This removes the burden of creating a new process each time a client establishes a connection with PostgreSQL and allows it to employ the resources that it would otherwise use for this into serving more requests (or completing them faster).

A general rule of thumb that we often hear is that you may need a connection pooler once you reach around 350 concurrent connections. However, the actual threshold is highly dependent on your database traffic and server configuration: as we find out recently, you may need one much sooner.

PgBouncer is a lightweight (thread-based) connection pooler that has been widely used in PostgreSQL based environments. It “understands” the PostgreSQL connection protocol and has been a stable project for over a decade.

PgBouncer allows you to configure the pool of connections to operate in three distinct modes: session, statement, and transaction. Unless you have a good reason to reserve a connection in the pool to a single user for the duration of its session or are operating with single-statements exclusively, transaction mode is the one you should investigate.

Once efficiency is taken care of, we can then start working on increasing the resources, or computing power, available to process database requests. Scaling vertically means, in short, upgrading the server: more and faster cores, memory, storage. It’s a simple approach, but one that reaches a practical limitation rather quickly. It is not in line with other requirements of an enterprise-grade solution, such as high availability. The alternative is scaling horizontally. As briefly introduced above, a common way for implementing horizontal scalability is to redirect reads to standby servers (replicas) with the help of a proxy, which can also act as a load balancer, such as HAProxy. We’ll be discussing these ideas further here, and showcase their integration in our webinar.

HAProxy is a popular open source TCP/HTTP load balancer that can distribute the workload across multiple servers. It can be leveraged in a PostgreSQL replication cluster that has been built using streaming replication. When you build replication using streaming replication method standby replicas are open for reads. With the help of HAProxy you can efficiently utilize the computing power of all database servers, distributing read requests among the available replicas using algorithms such as Least Connection and Round Robin.

A combination of connection pooler and load balancer to scale PostgreSQL

The following diagram represents a simplified part of the architecture that composes the enterprise-grade solution we’ve designed, where we employ PgBouncer and HAProxy to scale our PostgreSQL cluster: 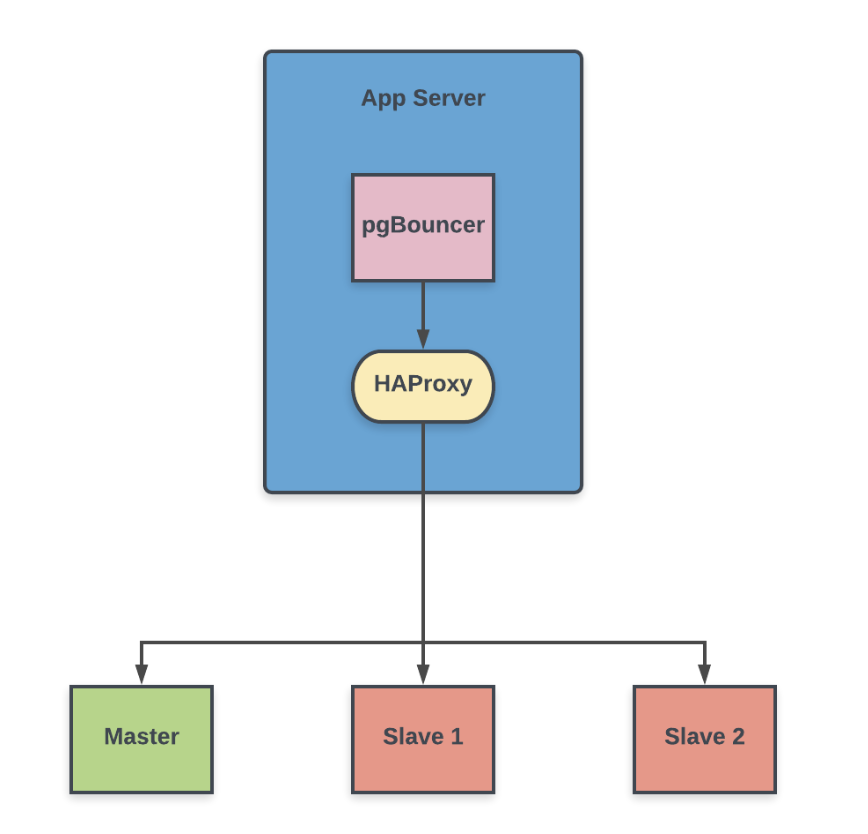 Our PgBouncer contains two database (alias) names, one for redirecting writes to the master and another for balancing reads across standby replicas, as discussed above. Here is how the database section looks in the pgbouncer.ini, PgBouncer’s main configuration file:

haproxy.cfg file (for simplicity, we haven't copied all the entries)
Shell

This way, we ensure that the application uses the advantage of a connection pooler to leverage connections to the database, and also of the load balancer which distributes the read load to multiple database servers as configured.

There are many other open source connection poolers and load balancers available to build a similar setup. You can choose the one that best suits your environment—just make sure to test your custom solution appropriately before bringing it to production.

Avinash Vallarapu joined Percona in the month of May 2018. Before joining Percona, Avi worked as a Database Architect at OpenSCG for 2 Years and as a DBA Lead at Dell for 10 Years in Database technologies such as PostgreSQL, Oracle, MySQL and MongoDB. He has given several talks and trainings on PostgreSQL. He has good experience in performing Architectural Health Checks and Migrations to PostgreSQL Environments.