This blog shares some column store database benchmark results, and compares the query performance of MariaDB ColumnStore v. 1.0.7 (based on InfiniDB), Clickhouse and Apache Spark.

The purpose of the benchmark is to see how these three solutions work on a single big server, with many CPU cores and large amounts of RAM. Both systems are massively parallel (MPP) database systems, so they should use many cores for SELECT queries.

For the benchmarks, I chose three datasets:

This blog post shares the results for the Wikipedia page counts (same queries as for the ClickHouse benchmark). In the following posts, I will use other datasets to compare the performance.

Although all of the above solutions can run in a “cluster” mode (with multiple nodes), I’ve only used one server.

I’ve loaded the above data into Clickhouse, ColumnStore, and MySQL (for MySQL the data included a primary key; Wikistat was not loaded to MySQL due to the size). MySQL tables are InnoDB with a primary key. 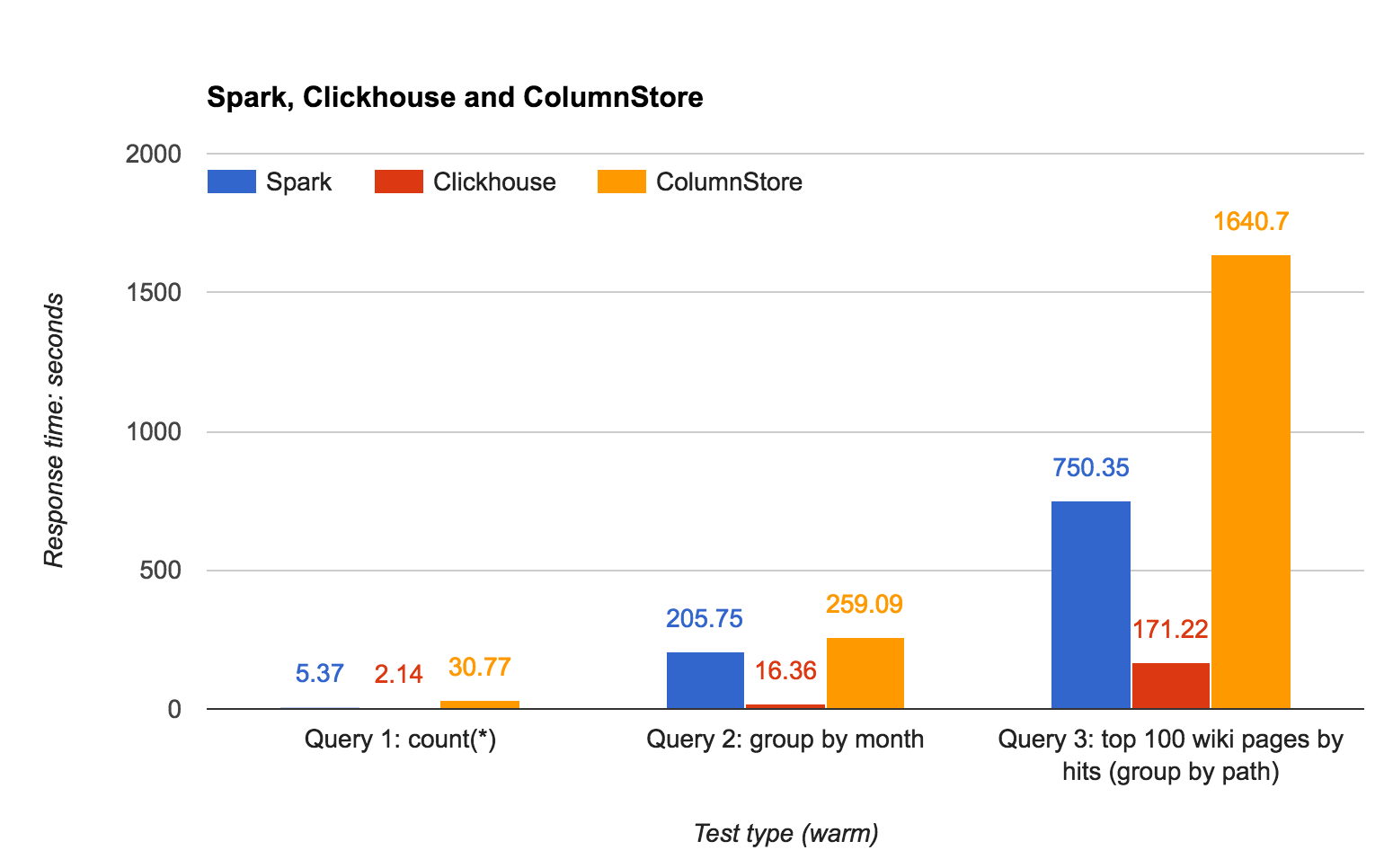 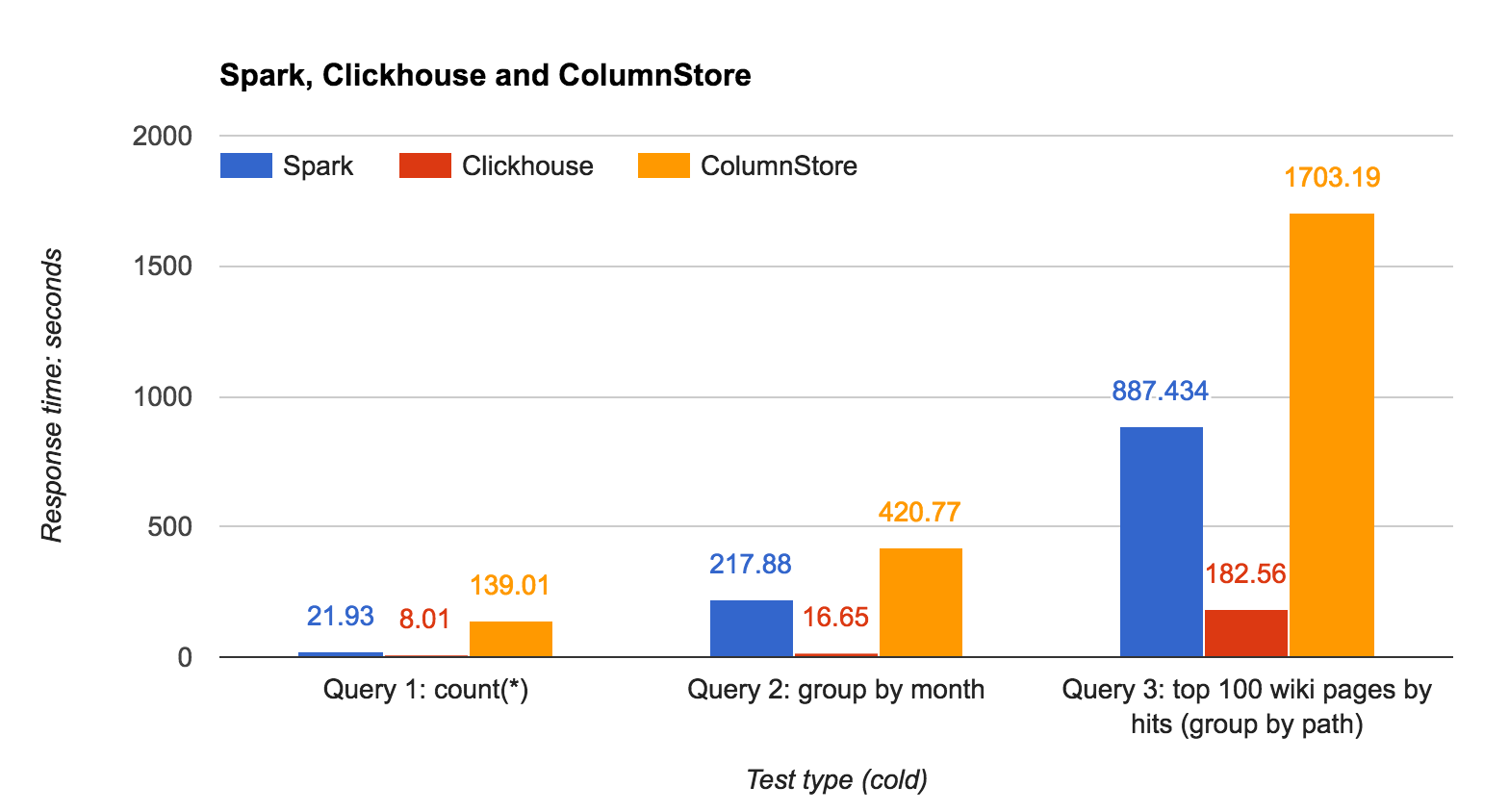 All of the solutions have the ability to take advantage of data “partitioning” and only scan needed rows.

ClickHouse has “primary keys” (for the MergeTree storage engine) and scans only the needed chunks of data (similar to partition “pruning” in MySQL). No changes to SQL or table definitions is needed when working with ClickHouse.

For ColumnStore we need to re-write the SQL query and use “between ‘2008-01-01’ and 2008-01-10′” so it can take advantage of partition elimination (as long as the data is loaded in approximate time order). When using functions (i.e., year(dt) or month(dt)), the current implementation does not use this optimization. (This is similar to MySQL, in that if the WHERE clause has month(dt) or any other functions, MySQL can’t use an index on the dt field.)

Apache Spark does have partitioning, however. It requires the use of partitioning with parquet format in the table definition. Without declaring partitions, even the modified query (“select count(*), month(date) as mon from wikistat where date between ‘2008-01-01’ and ‘2008-01-31’ group by mon order by mon”) will have to scan all the data.

The following table and graph show the performance of the updated query: 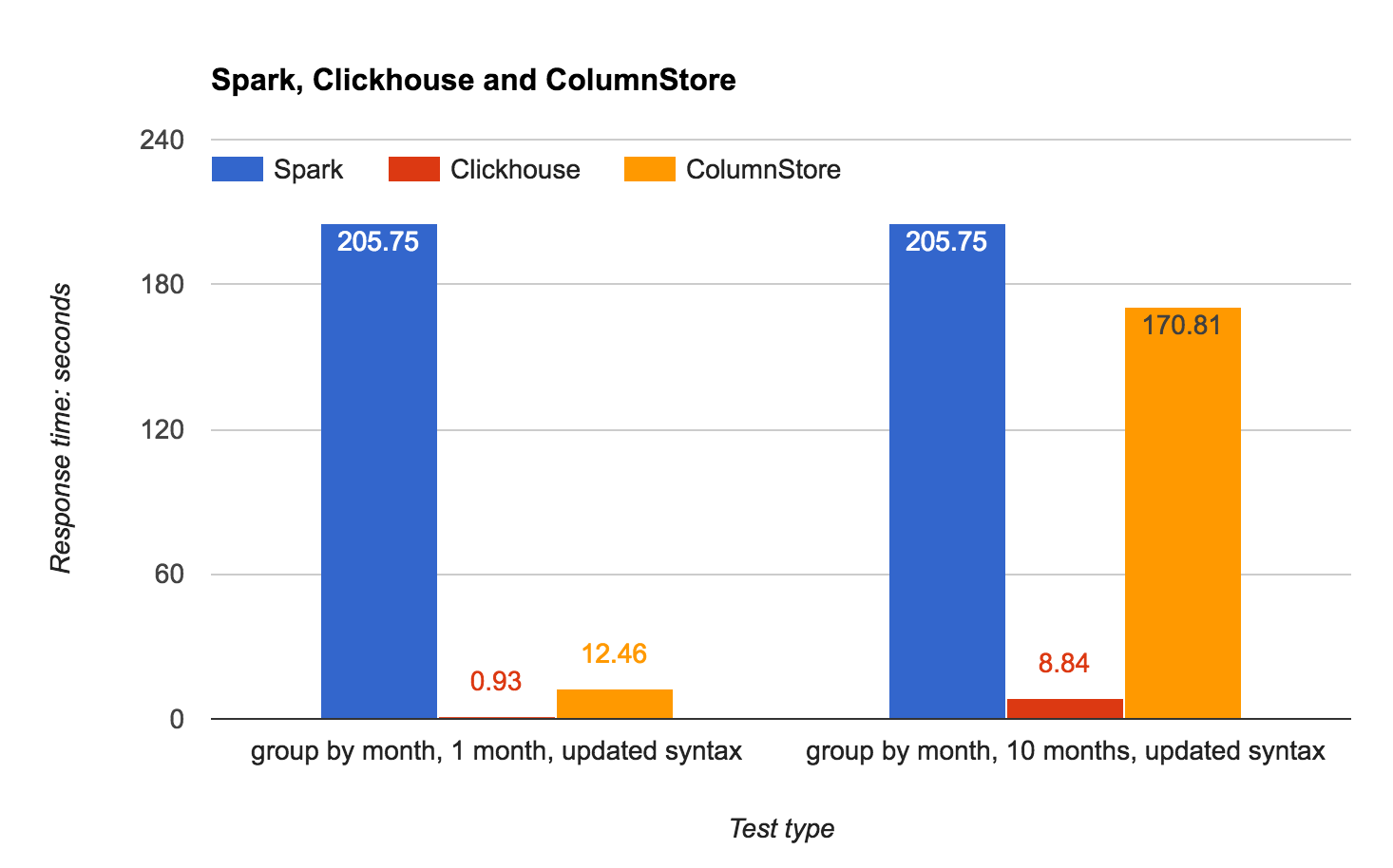 With 1Tb uncompressed data, doing a “GROUP BY” requires lots of memory to store the intermediate results (unlike MySQL, ColumnStore, ClickHouse, and Apache Spark use hash tables to store groups by “buckets”). For example, this query requires a very large hash table:

As “path” is actually a URL (without the hostname), it takes a lot of memory to store the intermediate results (hash table) for GROUP BY.

MariaDB ColumnStore does not allow us to “spill” data on disk for now (only disk-based joins are implemented). If you need to GROUP BY on a large text field, you can decrease the disk block cache setting in Columnstore.xml (i.e., set disk cache to 10% of RAM) to make room for an intermediate GROUP BY:

In addition, as the query has an ORDER BY, we need to increase max_length_for_sort_data in MySQL: