In this blog series, I will share my experiences as I migrate commercial databases (i.e., Microsoft SQL or Oracle) to open source (MySQL). More specifically, we will look at how you can migrate from MS SQL Server to MySQL.

When I started my research, I was under the impression that Jira database would be easy to migrate (no stored procedures, no triggers, etc.). It turned out that there were some problems that I was able to fix.

One of the reasons I chose Jira as opposed to some standard MS SQL database (such as AdventureWorks2014) is that it is a non-standard choice. Most of the software vendors use standard databases to test their software, and it works perfectly on those standard databases. Jira is not a usual choice and will be closer to real life.

MySQL Workbench supports Microsoft SQL Server migration. The migration is straightforward except the issues with character sets. I have experienced the error “Could not successfully convert UCS-2 string to UTF-8”. 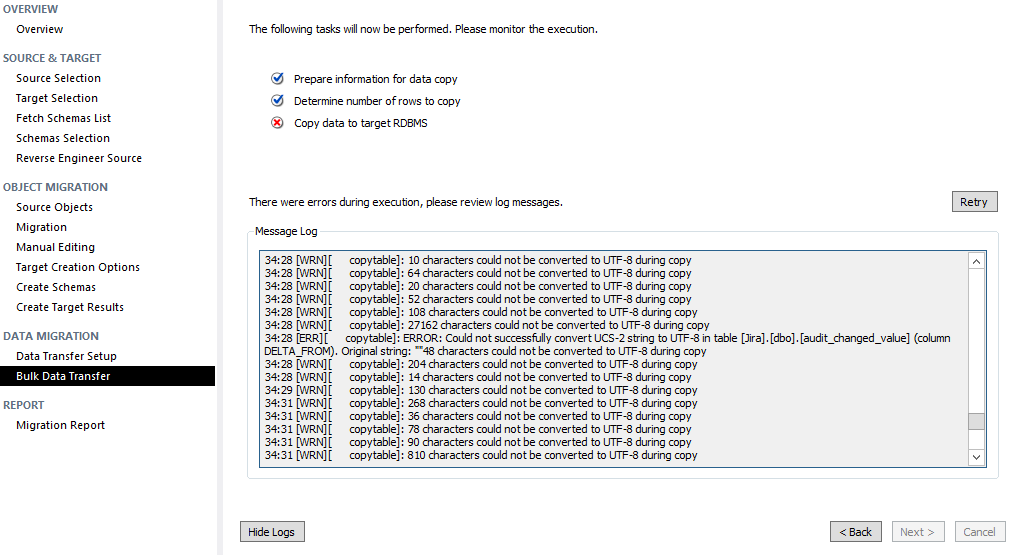 It turns out (with the help of Martin Brennan’s blog) that we will need to use “ODBC (FreeTDS)” drive for MS SQL, and enable sending Unicode data as UTF8: 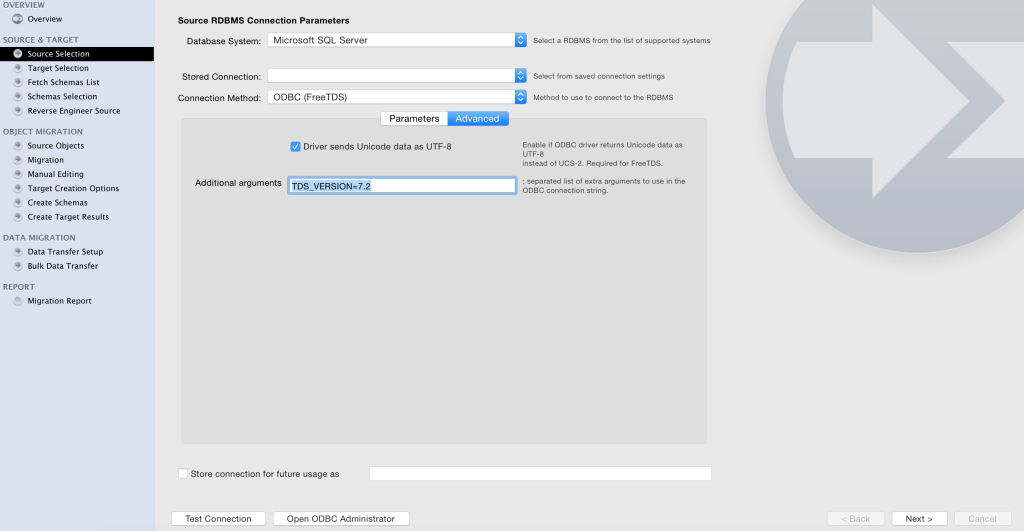 After changing those settings, I was able to successfully migrate Jira database from MS SQL to MySQL.

AWS Database Migration Service supports migrating from MS SQL to MySQL, but the actual migration method is different from other tools. It uses the source database (MS SQL server in this case) replication feature to stream the data to the target database (MySQL). Amazon DMS starts a temporary “migration” instance that is used to stream data. Both the source and destination database can be in AWS (EC2 or RDS) or outside AWS (no restriction). 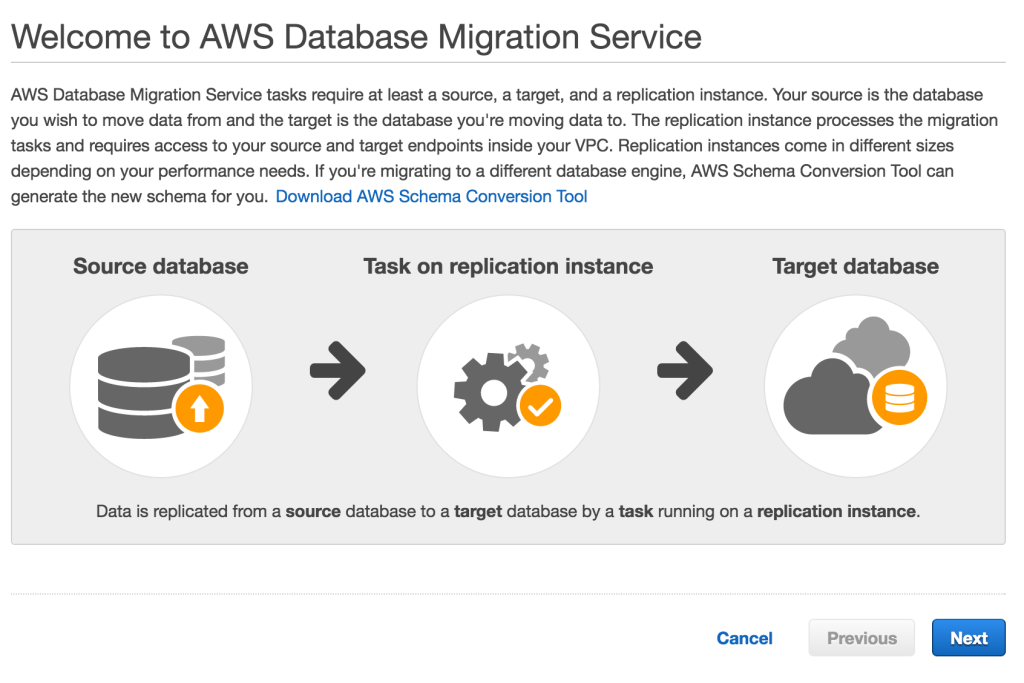 I’ve also gotten errors around the “constraint” name being too long:

After changing the “constraint” name in MS SQL to smaller strings, I could migrate all tables to MySQL.

(This section has been updated) I’ve figured out that the table structures generated by Workbench, Amazon DMS and SQLWays are different. For example:

In AWS DMS version, the index on CONTENT_KEY is missing and ID is not declared as auto_increment. However, the Workbench “lost” the character set. SQLWays wizard has created partial key (191 characters).

At the same time, I was able to start Jira on top of two versions of the MySQL database (migrated by using Workbench and Amazon DMS).

Ispirer MnMTK 2015 toolkit is a commercial (not open-source) software application that lets you migrate from MS SQL Server to MySQL (among other databases). Ispirer has provided me with a demo license so I can test the migration.

I was able to migrate the Jira database from MS SQL to MySQL with the Ispirer SQLWays Wizard: 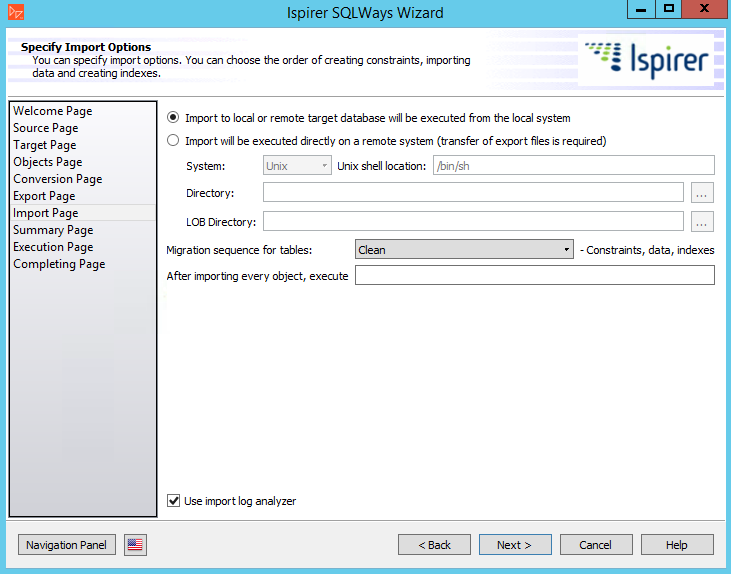 One issue with this process is that SQL Ways Wizard relies on the MySQL command line utility (“mysql”), which should be in the path. If you do not have MySQL installed on the migration machine, or it is not in the path, the migration will fail: 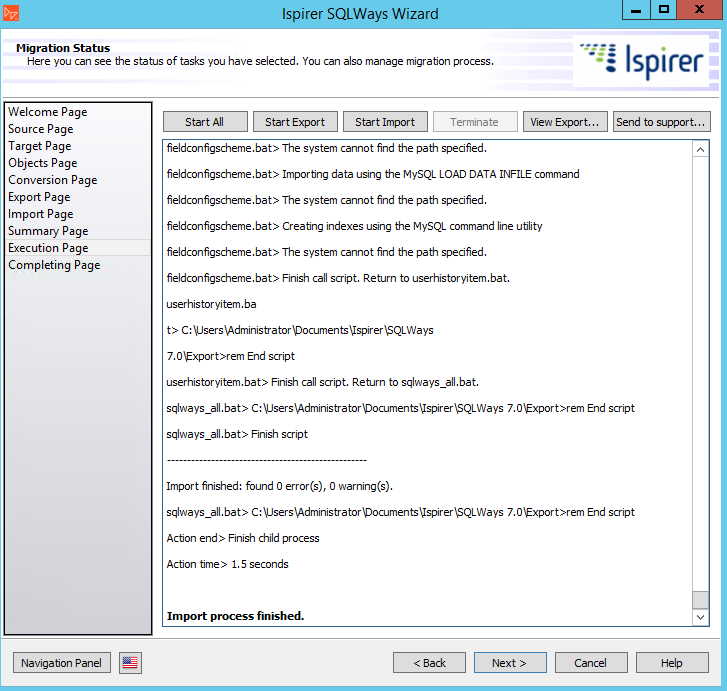 To fix simply add the MySQL “bin” directory to the path. In addition, you can use the SQL Ways Wizard to generate scripts and run those scripts on the destination host where the utilities are installed.

All tools I tried finally worked, but at the same time I was surprised with the number of issues I found. Migrating a very simple database (no stored procedures, no triggers, no foreign key constraints) should be easier.

Another surprise was that all tools are focused on a nice GUI with “next” buttons. For migrating one database to another, I would prefer using a command line tool interface (may be similar to Percona toolkit or iconv):

Actually, Ispirer MnMTK does have a command line migration utility included, but it only works on Windows.

Until somebody develops a better command line tool, any of the above solutions will help you migrate from MS SQL Server to MySQL.