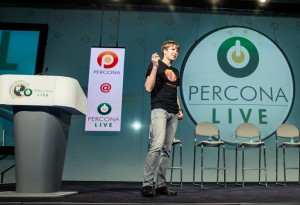 With highlights that included news of Percona’s acquisition of Tokutek, a lively keynote discussion with Apple legend Steve “Woz” Wozniak, scores of technical sessions, tutorials and a festive MySQL community dinner and game night, last week’s Percona Live MySQL Conference and Expo had something for everyone.

More than 1,200 attendees from around the world converged upon Santa Clara, California for the event, which included for the first time a two-day OpenStack Live track alongside a two-day crash course for aspiring MySQL DBAs called “MySQL 101.”

With the Tokutek acquisition, announced last Tuesday by Peter Zaitsev, Percona becomes the first company to offer both MySQL and MongoDB software and solutions. Percona has also taken over development and support for TokuDB® and TokuMX™ as well as the revolutionary Fractal Tree® indexing technology that enables those products to deliver improved performance, reliability and compression for modern Big Data applications. Peter talks in depth about the technologies in last week’s post.

Also on Tuesday, “Woz” and Jim Doherty, EVP of Sales & Marketing, talked about a range of issues associated with technology and innovation.

The Apple co-founder and inventor of the Apple I and Apple II computers also shared his thoughts on what influenced him growing up, his approach to problem solving, childhood education, artificial intelligence and more. (You can view the entire 45-minute conversation by clicking on the Woz to the left.)

Tweets of #PerconaLive during the conference hit nearly 2,000 – many with photos that are worth looking at (see all of the tweets here).

The other keynotes included:

In addition to the above keynotes, all of the sessions were recorded and will be available soon for registered attendees who had access to them at the conference. Most of the slides will be available soon to everyone via the Percona Live 2015 site. Just click the session you’re interested in and scroll to the bottom of the page to view the slides.

Congratulations go out to all of the MySQL Community Awards 2015 winners with a special thanks to Shlomi Noach and Jeremy Cole for running the awards program.

Finally, a round of applause for Percona’s director of conferences, Kortney Runyan, for her monumental efforts organizing the event. Kortney could not have succeeded without the support of our multiple service vendors including Ireland Presentations, Carleson Production Group, Tricord, the Hyatt Santa Clara, and the Santa Clara Convention Center, to name just a few.

Also announced last week was the new venue for Percona Live Europe, which will be held September 21-22 in Amsterdam. Percona Live Amsterdam promises to be bigger and better than ever. The Call for Papers is open for this exciting new venue so be sure to submit your proposals now.

See you in Amsterdam this September! And be sure to save the date for Percona Live 2016 – April 18-21 at the the Hyatt Santa Clara, and the Santa Clara Convention Center.