Since my first post on MySQL transaction descriptors optimization introduced in Percona Server 5.5.30-30.2 and a followup by Dimitri Kravchuk, we have received a large number of questions on why the benchmark results in both posts look rather different. We were curious as well, so we tried to answer that question by retrying benchmarks on various combinations of hardware and dataset sizes, including the ones that are as close as possible to Dimitri’s environment. To put a long story short, the results are fairly consistent with our original post across all test combinations. The details are below.

Here is a brief context recap. There are two cases covered in the first post:

Dimitri didn’t touch case #2 and focused only on case #1. Which is the perfect case for read-only transaction optimization in MySQL 5.6, because all SELECT queries in the AUTOCOMMIT mode are, by definition, read-only transactions, so the server deals with an empty transaction list when creating read views. However, the more general descriptors optimization in Percona Server showed fairly close results in our tests. In Dimitri’s tests Percona Server scalability is somewhere in between of MySQL 5.5 and MySQL 5.6.

In order to understand more about differences between results we have rerun tests on several our boxes. You can find setup/config details at the very end of this post.

All are NUMA boxes, but the second one has a higher QPI bandwidth, and the third one features even higher QPI speed (and thus, faster inter-process/node communication).

We first excluded NUMA from the equation. We ran tests on Dell PowerEdge R720 box and varied cpu combinations with taskset. The following chart shows a results comparison on a single-node (on the left) vs. two-node (on the right) configuration. 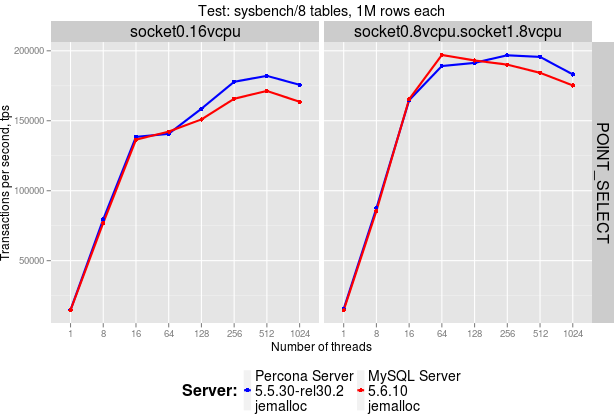 No surprises here, the general pattern is consistent with what we saw previously. Note that the single-node configuration used 16 threads (8 cores on a single socket x 2 threads per socket), while the second one use 16 cores (8 cores per socket per node). So this test also excludes HT as the culprit for the results difference.

We then compared results across all 3 boxes to see if different hardware has any notable impact: 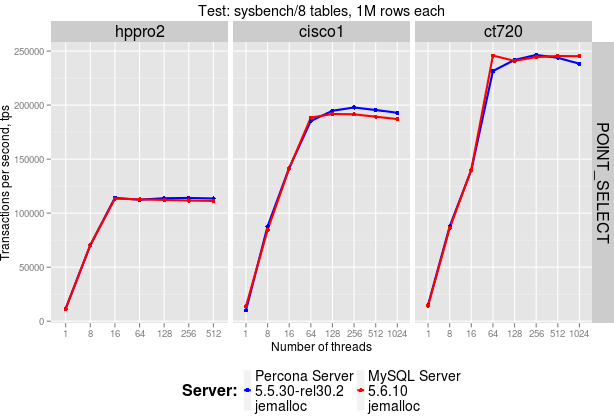 Still no luck, everything is in line with the other tests. There is some minor variation, e.g. in the first two cases Percona Server performance is even slightly ahead of MySQL 5.6.10, but nothing unexpected.

So while the difference in results still requires an explanation, I’d like to highlight one aspect of the descriptors optimization that I thought was explained in the original post, but seems to cause much confusion.

Once we step away from this spherical read-only cow and throw some data updates into the mix, limitations of read-only transactions become obvious.

In the following test sysbench does 9 primary key SELECTs followed by a PK UPDATE statement in each thread in a loop, which is probably a bit closer to real life workloads. It’s still the AUTOCOMMIT mode, so SELECTs are read-only transactions, but it doesn’t help much, because e.g. for 1024 concurrent threads each SELECT has to scan about 100 update transactions to create a read view: 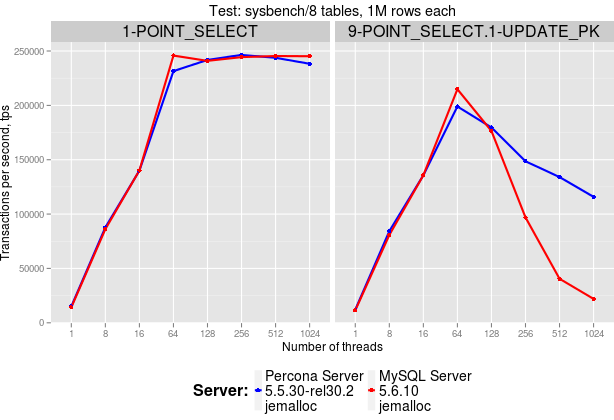 I hope this sheds more light on our tests setup and clarifies the scope of descriptors optimization.

To warmup server and load data and indices to the buffer pool we use following queries:

Alexey Kopytov is a Principal Software Engineer at Percona. Before joining Percona in 2010 he was a member of the MySQL development team at Oracle. His focus at Percona is development of both Percona Server and Percona XtraBackup.