One major problem in terms of MySQL performance that still stands in the way of InnoDB scalability is the trx_list scan on consistent read view creation. It was originally reported as a part of MySQL bug #49169 and can be described as follows. Whenever a connection wants to create a consistent read, it has to make a snapshot of the transaction states to determine which transactions are seen in the view later. To this end, InnoDB scans trx_list (i.e. the list of currently open transactions) and copies IDs of transactions that have not yet been committed at the current point in time, and thus should not be visible in the consistent read. For the REPEATABLE_READ isolation level, the snapshot is created on the first SELECT for each transaction. For lower isolation levels it is created for each SELECT, even within the same transaction.

Why is that a major problem for MySQL scalability? The scan is performed under kernel_mutex (or trx_sys->mutex in 5.6) and that is one of the top reasons for contention on that mutex.

Percona Server as of version 5.5.30-30.2 significantly reduces the impact of the list scan by replacing it with more efficient operations. In a nutshell, it maintains an array of active transactions which we call the trx descriptors array. Creating a snapshot of transaction states is then a matter of copying a relatively small memory block which, depending on many factors, can be from few times to orders of magnitudes faster than a list scan.

You may be curious if MySQL 5.6 brings any notable improvements in this area. It does, but only for a special case. Read-only transactions, while a great optimization in itself, applies only to the following kinds of transactions:

The relevant optimization in MySQL 5.6 boils down to the fact that read-only transactions are not added to the list of open transactions. Since they don’t modify any data, it is irrelevant whether a consistent read view sees them or not.

The main limitation is obvious: if you want to benefit from that optimization, you basically want all or most of your transactions to be read-only. Sometimes you may also want to modify your applications to issue START TRANSACTION READ ONLY appropriately. Which is not always applicable or possible in practice.

The “trx descriptors” optimization in Percona Server attacks this problem from a different (and a wider!) angle. It requires neither read-only server nor rewriting application queries. Furthermore, it can be combined with the read-only optimization in MySQL 5.6 to achieve even better scalability while removing the read-only limitations.

Let’s take a look at the following benchmark: 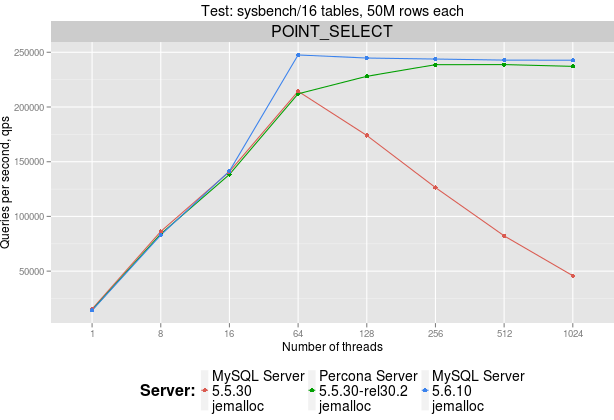 This is the so-called QPS-mode POINT_SELECT benchmark, i.e. all queries are single-statement SELECT statements in autocommit. Which is the perfect case for read-only optimization in MySQL 5.6 and as you can see MySQL 5.6 shines in this benchmark. This is also the case that Oracle seems to focus the most in their MySQL 5.6 benchmarks. However, the “trx descriptors” optimization in Percona Server 5.5 is fairly close in terms of scalability, while the cost of the trx_list scan in MySQL 5.5 basically kills throughput on high concurrency.

The picture changes dramatically when the read-only optimization in MySQL 5.6 does not kick in. The default sysbench POINT_SELECT mode benchmark does PK lookup SELECT queries wrapped into regular (i.e. not marked as read-only) transactions. 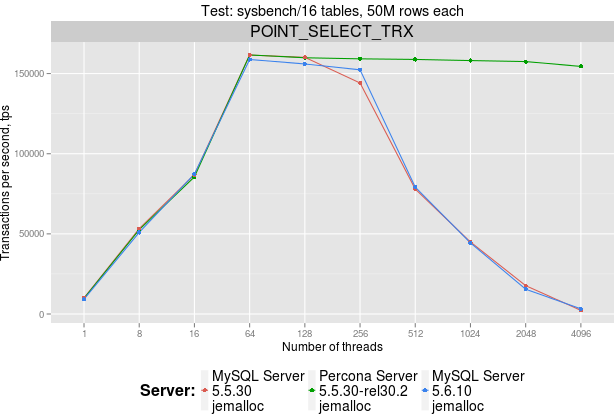 In this case MySQL 5.6 scalability goes back to the good old MySQL 5.5 times and we see identical results with both, i.e. there’s a notable drop in throughput starting from 256 threads.

But Percona Server’s scalability is the same as in the previous benchmark. The overhead of maintaining the descriptors array is negligible as compared to the list scan and it provides stable throughput even at 4096 concurrent connections.

We are going to blog about other MySQL performance improvements introduced in our latest Percona Server release, stay tuned.

Alexey Kopytov is a Principal Software Engineer at Percona. Before joining Percona in 2010 he was a member of the MySQL development team at Oracle. His focus at Percona is development of both Percona Server and Percona XtraBackup.