This post is a step-by-step guide to set up Percona XtraDB Cluster (PXC) in a virtualized test sandbox. I used Amazon EC2 micro instances, but the content here is applicable for any kind of virtualization technology (for example VirtualBox). The goal is to give step by step instructions, so the setup process is understandable and it could serve as a reference architecture.

You will need 4 virtual machines. 3 for PXC and 1 for the client, which will have HaProxy. I used CentOS 6 as the operating system, the instructions are similar for any Linux distribution.

The client node will have HaProxy installed and it will redirect requests to PXC nodes. This approach works well in real-world scenarios too. Running HaProxy on the application servers instead of having them as dedicated entities gives you benefits like you don’t need an extra network roundtrip because of a loadbalancer and scalability of PXC’s load balancing layer scales simply with application servers.

After configuring the repositories you will be able to install software that we will use. First, install PXC on the database nodes.

Install haproxy and sysbench on the client node.

After installing everything, let’s configure PXC first. On the first node, my.cnf should look something like this on a relatively weak machine.

You can start your first node now. Make sure that you only start second and third nodes when the first node is up and running (it will serve as a donor for SST).

This configuration is for the first node. For the second and third node, you need to change wsrep_cluster_address (alternatively, you can use wsrep_urls in [mysqld_safe] section), which should point to a node in the cluster which is already up, so it will join the cluster. The server_id and wsrep_node_name variables have to be different on each host, for wsrep_node_name, you can use the output of hostname command.

Based on that, for the second node, the differences in the configuration should be the following.

For the third node, the differences look like this.

For SST we use xtrabackup. This means at startup time, the new node will connect to an existing node in the cluster and it takes a backup of that node with xtrabackup and copies it to the new node with netcat. After a successful SST, you should see this in the error log.

For debugging information about the SST, you can check the sst.err file and the error log too.

After the SSTs are done, you should check if you have a 3 node cluster.

In order to achieve this, we will configure HaProxy on the client node. There are 2 possible configurations here.
First is configuring round robin, which means we will connect and write to all cluster nodes. This can be done, but because of optimistic locking at commit time, rollbacks can happen if we have conflicting writes. In the second configuration, we will configure haproxy in a way that it writes only to one node, so the application doesn’t have to be prepared about unexpected rollbacks. The first configuration is a good choice in most cases, not handling rollbacks is not healthy in a well behaving application anyway.

HaProxy can be configured in the /etc/haproxy/haproxy.cfg and it should look like this.

In this configuration, we defined 3 frontend-backend pairs. The stats pair is for haproxy’s statistics page, and the others are for PXC. We will have MySQL listening on 3306 and 3307. If we connect to port 3306, we will connect to pxc-onenode, so we will only use one node at a time (to avoid rollbacks bcause of optimistic locking). If that node goes offline, we will start using an other one.
However if we connect to port 3307, we will use all the 3 nodes for reads and writes too. We are using the leastconn load balancing method instead of round robin, which means we always connect to the backend with the least connections established.
The statistics page is accessible on the client node with a browser pointed to /haproxy/stats, the stats auth parameter in the configuration has the credentials for that in plain text. You can also use this for monitoring purposes (the CSV version is good for trending and alerting).

Here MySQL is checked via HTTP checks. MySQL won’t serve these requests. As part of PXC packages, we distribute the clustercheck utility which has to be set up. After that, HaProxy will be able to use check MySQL via HTTP. The clustercheck script is a simple shell script, which accepts HTTP requests, and checks MySQL on incoming request. If the PXC node is ok, it will emit a reposnse with HTTP code 200 OK, otherwise, it emits 503. The script examines wsrep_local_state variable.

To set it up, create the clustercheck user.

If you want to use a different username or password, you have to modify them in the script too.
Let’s test.

We will use xinetd to daemonize the script. If xinetd is not installed yet, you can install it with yum.

The servie itself should be configured in /etc/xinetd.d/mysqlchk.

Also, we should add the new service to /etc/services.

Clustercheck will now listen on port 9200 after xinetd restart, and haproxy is ready to check MySQL via HTTP.

If you did everything right so far, the statictics page of HaProxy should look like this. 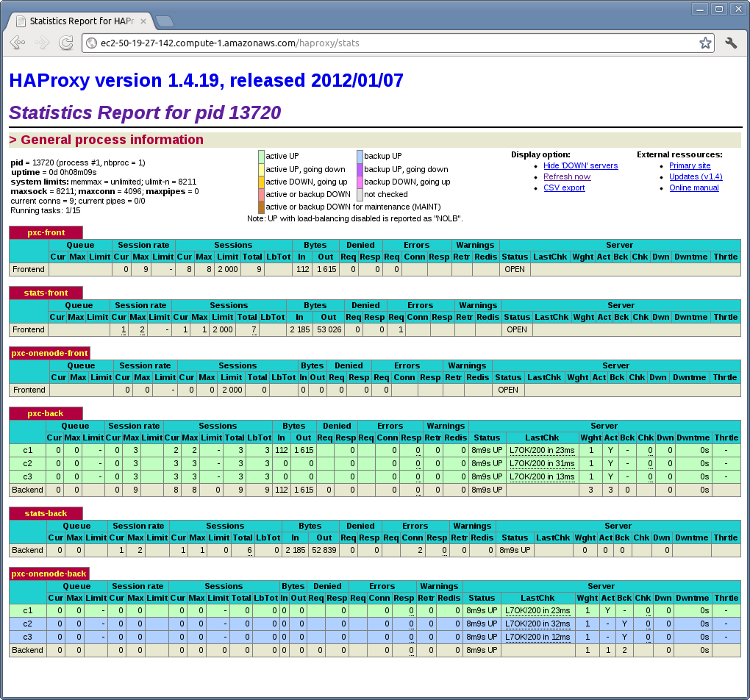 Next we will try to use the cluster with sysbench. We will use sysbench from the EPEL repo. First, let’s create a database and a userfor it.

Populate the table with data for the benchmark.

Let’s run the bechmark against the 3307 port.

This is the status of pxc-back backend while the sysbench above is running. If you look at Cur column under Session, you can see, that c1 has 2 threads connected, c2 and c3 has 3.

If we run the same benchmark, but against the 3306 backend, haproxy stats will show us that the all the threads are going to hit the c1 server.

This is the status of pxc-onenode-back while sysbench above is running. Here only c1 has 8 connected threads, c2 and c3 are acting as backup nodes.