Having two big boxes in our lab, one based Intel Nehalem (Cisco UCS C250) and second on AMD Opteron (Dell PowerEdge R815), I decided to run some simple sysbench benchmark to compare how both CPUs perform and what kind of scalability we can expect.

It is hard to make apples to apples comparison, but I think it is still interesting.
Cisco UCS C250 has total 12 cores / 24 threads of Intel Nehalem X5670, and Dell PowerEdge R815 has 48 cores of AMD Opteron 6168.
One of biggest difference is that Cisco is running CentOS 5.5 and Dell R815 is based on RedHat EL 6. I will probably will need to rerun benchmark after upgrade Cisco to CentOS 6 ( will be it even released or it is dead ? ).
For benchmark I took sysbench oltp ( both read-only and read-write) and MySQL 5.6.2 as it seems most scalable system at the moment. All data fits into memory, so it is full CPU bound benchmark.

The full numbers, script and config are on our Benchmark Wiki, there are some graphs. 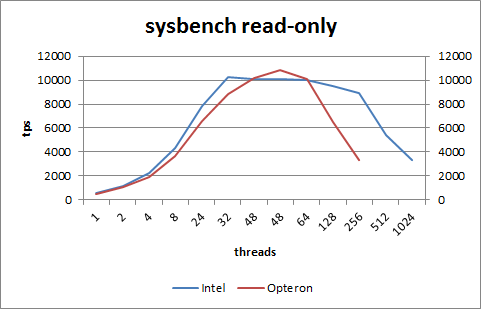 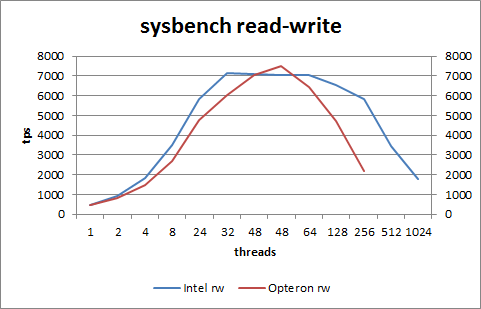 Ok, Despite claims I heard that AMD Opteron is much slower then Intel Nehalem, I do not see it in results.
Both systems scales pretty decent up to 32 threads, with AMD a little bit slower.

After 32 threads, system based on Intel handles 48-256 threads pretty decent, but on R815 / AMD something
gets wrong way. We do not see good improvement from 32 to 48 threads ( but I did expect that, as we have 48 cores),
and after 48 threads throughput drops significantly. I actually suspect this is rather MySQL problem, and 32 cores may be limit of scaling for MySQL 5.6.

Anyway, we have PERFORMANCE_SCHEMA and in next run I will try to get more information what is most used “wait” event that does not allow MySQL to scale.