Accidentally me and Baron played with InfoBright (see https://www.percona.com/blog/2009/09/29/quick-comparison-of-myisam-infobright-and-monetdb/) this week. And following Baron’s example I also run the same load against MonetDB. Reading comments to Baron’s post I tied to load the same data to LucidDB, but I was not successful in this.

I tried to analyze a bigger dataset and I took public available data
http://www.transtats.bts.gov/DL_SelectFields.asp?Table_ID=236&DB_Short_Name=On-Time about USA domestic flights with information about flight length and delays.

for MonetDB. For InfoBright it took 4.19 sec to execute and 29.9 sec for MonetDB, but it’s almost single case where MonetDB was significantly slower)

The table I loaded data is:

Last fields starting with “Div*” are not really used.

Infobright: the loader that comes with ICE version is very limited and I had to transform files to quote each field. After that load statement is:

The size of database after load is 1.6G which is impressive and give 1:34 compress ratio.

MonetDB: It took some time to figure out how to load text data ( I really wish developers improve documentation), but finally I ended up with next load statement:

Database size after load is 65G , which is discouraging. It seems it does not use any compression, and it’s bigger than original data.

utility, and I did not understand how to do that, so I generated big SQL file which contained load statements.

Load of each chunk was significantly slower starting with about 60 sec/chunk for initial year and constantly growing to 200 sec / chunk for 2000 year. On 2004 year (after about 5h of loading) the load failed by some reason and I did not try to repeat, as I would not fit in timeframe I allocated for this benchmark. Maybe I will try sometime again.

Query execution
So I really have data for InfoBright and MonetDB, let see how fast they are in different queries.

First favorite query for any database benchmarker is

. Both InforBritgh and MonetDB executes it immediately with result 117023290 rows

Now some random queries I tried again both databases:

And 0.9s execution for MonetDB and 6.37s for InfoBright.

But it obvious that the more flight carrier has, the more delays, so to be fair, let’s calculate
-Q5: Percentage of delays for each carrier for 2007 year.
It is a bit more trickier, as for InfoBright and MonetDB you need different query:

I am using c*1000/c2 here, because MonetDB seems using integer arithmetic and, with c/c2 I received just 1.

with execution time: 0.5s for MonetDB and 2.92s for InfoBright.

Warnings: do not try EXPLAIN this query in InfoBright. MySQL is really stupid here, and EXPLAIN for this query took 6 min!

(AS is Alaska Airlines Inc. and B6 is JetBlue Airways)

And with execution time 27.9s MonetDB and 8.59s InfoBright.

It seems MonetDB does not like scanning wide range of rows, the slowness here is similar to Q0.

-Q8: As final I tested most popular destination in sense count of direct connected cities for different diapason of years.

UPDATE (5-Oct-2009): James Birchall recommended to use hint COMMENT ‘lookup’ for fields in InfoBright that have less 10.000 distinct values.
I tried that, and it affected only these queries. Results with changes:

-Q9: And prove that MonetDB does not like to scan many records, there is query

To group all results there is graph: 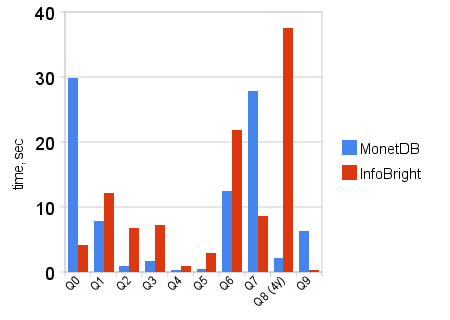 I am open to run any other queries if you want to compare or get info about air performance.