Back From a Long Sleep, MyDumper Lives! 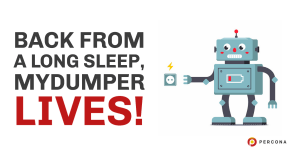 MySQL databases keep getting larger and larger. And the larger the databases get, the harder it is to backup and restore them.  MyDumper has changed the way that we perform logical backups to enable you to restore tables or objects from large databases. Over the years it has evolved into a tool that we use at Percona to back up petabytes of data every day. It has several features, but the most important one, from my point of view, is how it speeds up the entire process of export and import.

Until the beginning of this year, the latest release was from 2018; yes, more than two years without any release. However, we started 2021 with release v0.10.1 in January, with all the merges up to that point and we committed ourselves to release every two months… and we delivered! Release v0.10.3 was released in March with some old pull requests that have been sleeping for a long time. The next release is planned to be in May, with some of the newest features.

Just to clarify, mydumper/myloader are not officially-supported Percona products. They are open source, community-managed tools for handling logical backups and restores with all flavors of MySQL.

The principal maintainer remains Max Bubenick, and I’ve been helping out with reviewing issues and pull requests to give better support to the community.

Better planning means that it is not just released on time; we also need to decide what is the new feature that we are going to be packaging in the next release, and the level of quality.

The releases were in 2021, but this effort started in 2020 and I had been working on the release repository as it wasn’t being maintained.

Exciting times! There are three features that I would like to mention, not because the others are not important, but rather, because they will speed up the import stage.

I was able to measure the speed-up of the first two and we could get up to 40% on large tables with multiple secondary indexes. The latest one is not implemented yet, but taking into account that the import will be started alongside the export, we can expect a huge reduction in the timing.

We still have a lot of opportunities to make MyDumper a major league player. Feel free to download it, play with it, and if you want to contribute, we need your help writing code, testing, or asking for new features.