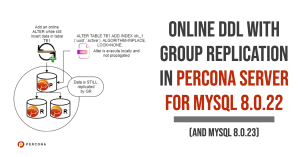 While I was working on my grFailOver POC, I have also done some additional parallel testing. One of them was to see how online DDL is executed inside a Group Replication cluster.

The online DDL feature provides support for instant and in-place table alterations and concurrent DML. Checking the Group Replication (GR) official documentation, I was trying to identify if any limitation exists, but the only thing I have found was this:

This impacts only when you have a multi-primary scenario, which is NOT recommended and not my case. So, in theory, GR should be able to handle the online DDL without problems. 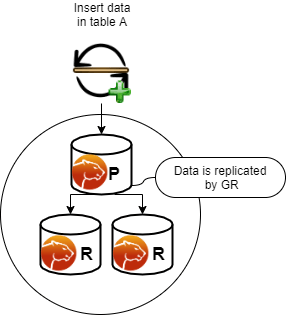 I have two DCs and I am going to do actions on my DC1 and see how it propagates all over, and what impact it will have.

To do the test, I will run and insert from select.

And a select, on my Primary node gr1, while on another connection execute the ALTER:

As you may have noticed, I am EXPLICITLY asking for INPLACE and lock NONE. So in this case, MySQL cannot satisfy;  it should exit and not execute the command.

In the meantime, on all other nodes, I will run a check command to see WHEN my ALTER is taking place. Let us roll the ball:

On my Primary, the command to insert the data:

Again on Primary another session to execute the ALTER:

On other nodes to monitor when ALTER will start:

Data is inserted by the loop. 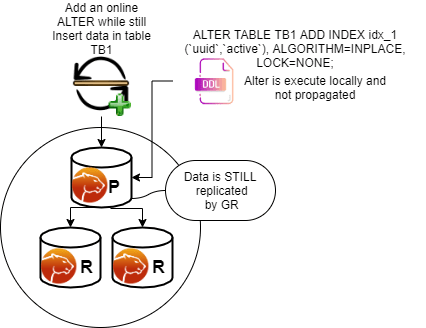 ALTER starts, but I can still insert data in my table, and most importantly, the data is propagated to all nodes of the DC1 cluster.

No ALTER action on the other nodes.

Once ALTER is complete on the local node (Primary) it is then executed (broadcast) to all the nodes participating in the cluster.

But writes are suspended, waiting for:

And eventually, it will timeout.

The other point is that any write hangs until the slowest node had applied the ALTER. It is important to note that all nodes, not only the PRIMARY, remain pending waiting for the slow node: the slowest drives all.

Finally, when the last node in the GR cluster has applied the ALTER, the writes will resume, and the Replica node on DC2 will start its ALTER operation on PRIMARY first, then on the other nodes.

It seems that at the moment we have partial coverage of the online ddl feature when using group_replication. Of course, to have to wait for the SECONDARY nodes is better and less impacting than to wait for PRIMARY first and then the SECONDARIES.

But it is confusing, given I was expecting to have either full online coverage (I had explicitly asked for that in the DDL command) or a message telling me it cannot be executed online.  Of course, I would prefer to have FULL online coverage. ;0)

Keep in mind my setup was also pretty standard and that changing group_replication_consistency does not affect the outcome. But not sure I can classify this as a bug, more an unexpected undesirable behavior.