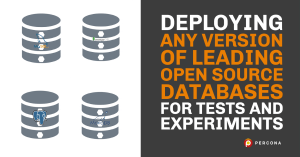 I want to present a tool for running a specific version of open source databases in a single instance, replication setups, and Kubernetes. AnyDbVer deploys MySQL/MariaDB/MongoDB/PostgreSQL for testing and experiments.

It Could Be Started By…

Docker (or Podman) or dbdeployer (MySQL-Sandbox successor) could also start a specific database version, but such installations are significantly different from production setups.

There is an Ansible playbook with few roles configurable by environment variables.

You may ignore the Ansible layer because the ./anydbver bash script hides it.

It’s not practical to reserve physical servers or virtual machines for all tasks. Frequently you need just a few database instances and the ability to restart it with systemd and check logs with journalctl. AnydbVer spawns one or more Linux Containers managed by Canonical (Ubuntu) LXD, and LXD containers support systemd not using a layered filesystem setup.

Linux Containers is not an emulation layer. From the “host” system, you can see all processes and files created by containers. Thus the performance is very similar to the same database running on a physical server.

You Can Run Vagrant + VirtualBox as Well, For Other OS

LXD setup is relatively easy, but sometimes you may need to run AnydbVer just with a few commands. Vagrant could start an unmodified Ubuntu virtual machine and automatically configure AnydbVer for you.

You can find the required files and setup instructions at https://github.com/ihanick/anydbver.

Clone the https://github.com/ihanick/anydbver repository to setup LXD or start Vagrant.

You are not limited to using full version specification. To use the latest matching version, reduce 5.6.43-rel84.3 down to 5.6.43 or even 5.6. To run other databases, replace percona-server with:

Several containers are not consuming a significant amount of resources. Actually five MySQL container instances will consume the same resources as five individual processes running on the same host. The syntax is:

All other nodes (replace node1 with other node names):

You may have a server hostname specified. For example let’s run two Percona Server for MySQL instances:

The most interesting part of modern open-source databases is replication. Even active-active replication setups are starting from a single server (leader or master/primary). Start the first node normally and attach additional nodes with master:nodename or leader:nodename. PXC or Galera servers could participate in both synchronous and asynchronous replication. Thus, for Galera clusters, you need galera-master or galera-leader syntax.

Run master and two async slaves with Percona Server for MySQL and add all three servers to ProxySQL setup:

The fact that we are already using containers (LXD) shouldn’t confuse you. We can still run docker images inside our nodes. Nested containers and Podman makes it possible.

Let’s deploy the default node with Podman and run the Percona Monitoring and Management (PMM) server docker container in it. Percona Server for MySQL 5.7 with PMM client will run on node1:

On a default node, we can execute kubectl or helm: