PostgreSQL: DB-Engines.com’s Database of the Year

For the third time in the last five years, PostgreSQL took home the Database of the Year award from DB-Engines. If you have not checked out DB-Engines before, they track databases’ popularity by looking at job openings, blog posts, search traffic, and more. 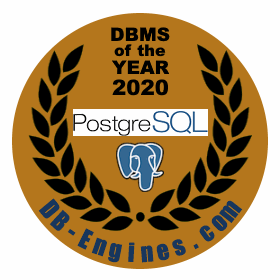 Congratulations to the PostgreSQL community, its contributors, and its users! There is no doubt that over the last five years, PostgreSQL has not only provided a wonderfully active and welcoming community but has developed a growing install base based on its in-depth features, accessibility, and openness. Independently, our own Percona Open Source Data Management Software Survey and the Stack Overflow 2020 Developer Survey both showed growth in the PostgreSQL install base in the past year.

Why Are More People Choosing PostgreSQL?

A few of the more popular reasons companies are moving to PostgreSQL are:

In 2020, PostgreSQL released its 13th version, which continued and enhanced its evolution toward a stable, secure, and performant database. Some of the highlights include:

PostgreSQL is not just a great piece of software; it is an incredible and welcoming community. Percona started offering support, services, and software around PostgreSQL in 2018. Over the almost three years we have officially provided services, we have seen just how welcoming and remarkable the entire PostgreSQL community is. Thank you to all the contributors of code, content, and time in the community. You have helped make PostgreSQL even better! We would not be here today without you all.