Earlier in November, we had a chance to present the “Google Cloud Platform: MySQL at Scale with Reliable HA.” We discussed different approaches to hosting MySQL in Google Cloud Platform with the available options’ pros and cons. This webinar was recorded and can be viewed here at any time. We had several great questions, which we would like to address and elaborate on the answers given during the webinar. 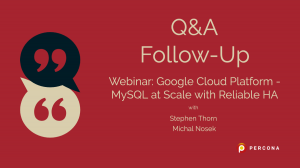 Q: What is your view on Cloud SQL High Availability in Google Cloud?

A: Google Cloud SQL provides High Availability through regional instances. If your Cloud SQL database is regional, it means that there’s a standby instance in another zone within the same region. Both instances (primary and standby) are kept synced through synchronous replication on the persistent disk level. Thanks to this approach, in case of an unexpected failover, no data is lost. The biggest disadvantage of this approach is that you have to pay for standby resources even though you can’t use the standby instance for any traffic, which means you double your costs with no performance benefits. Failover typically takes more than 30 seconds.

To sum up, High Availability in Google Cloud SQL is reliable but can be expensive, and failover time is not always enough for critical applications.

Q: How would one migrate from Google Cloud SQL to AWS RDS?

A: The easiest way to migrate if you can afford downtime is stopping the write workload to the Cloud SQL instance, taking a logical backup (mysql or mydumper), restoring it on AWS RDS, and then moving the entire workload to AWS RDS. In most cases, it’s not enough. The situation is more complex when you want to make it with no (or minimal) downtime.

To avoid downtime, you need to establish replication between your Cloud SQL (source) and RDS instances (replica). Cloud SQL can be used as a source instance for external replicas, as described in this documentation. You can take a logical backup from running a Cloud SQL instance (e.g., using mydumper), restore it to RDS and establish the replication between Cloud SQL and RDS. Using an external source for RDS is described here. It’s typically a good idea to use a VPN connection between both cloud regions to ensure your connection is secure and the database is not exposed to the public internet. Once replication is established, the steps are as follows:

AWS DMS service can also be used as an intermediary in this operation.

A: In general, replication between clouds is possible (see the previous question). Both Google Cloud SQL and AWS RDS can act as source and replica, including external instances as a part of your replication topology. High-availability solutions, though, in both cases, are very specific for a cloud provider implementation, and they can’t cooperate. So it’s not possible to automatically failover from RDS to GCP and vice versa. For such setups, we would recommend custom installation on Google Compute Instance and AWS EC2 with Percona Managed Database Services – if you don’t want to manage such a complex setup on your own.

Q: How did you calculate IOPS and throughput for the storage options?

A: We did not calculate the presented values in any way. Those are taken directly from Google Cloud Platform Documentation.

Q: Could you explain how to keep the primary instance available and writable during the maintenance window?

A: It’s not possible to guarantee the primary instance availability. Remember that even if you choose your maintenance window when you can accept downtime, it may or may not be followed (it’s just a preference). Maintenance events can happen at any point in time if they’re critical and may not be finished during the assigned window. If that’s not possible to accept by your application, we recommend designing a highly-available solution, e.g., with Percona XtraDB Cluster on Google Compute Engine instances instead. Such a solution won’t have such maintenance window problems.