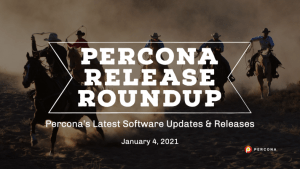 Our Release Roundups showcase the latest Percona software updates, tools, and features to help you manage and deploy our software. It offers highlights and critical information, as well as links to the full release notes and direct links to the software or service itself to download.

Today’s post includes those releases and updates that have come out since December 29, 2020, including releases of Percona Distribution for MySQL (PXC variant), Percona Monitoring and Management 2.13.0, and several Percona Server for MongoDB updates.

December 28, 2020, saw the release of Percona Distribution for MySQL (PXC variant) 8.0.21. It is a single solution with the best and most critical enterprise components from the MySQL open source community, designed and tested to work together. This release of Percona Distribution for MySQL is focused on the Percona XtraDB Cluster-based deployment variant and is based on Percona XtraDB Cluster 8.0.21-12.1.

Percona XtraDB Cluster 8.0.21-12.1 was released on December 28, 2020. It is our free, open source, enterprise-grade solution that includes the high availability and security features your business needs to meet customer expectations and business goals. An improvement in this release is improved messaging for “BF lock wait long” timeout, and bug fixes include the resolution of package conflict when installing PXC 5.7 on RHEL/CentOS8, a fix for a crash when log_slave_updates=ON and consistency check statement is executed, and a fix for error handling when the donor is not able to serve SST.

In addition, there are some known issues that are currently not fixed but you should be aware of. These can be read about in the release notes.

On December 29, 2020, Percona Monitoring and Management 2.13.0 was released. It is a free and open-source platform for managing and monitoring MySQL, MongoDB, and PostgreSQL performance. There are several improvements and bug fixes in this release, but some highlights include the ability to monitor SSL-enabled MongoDB and the first preview of DBaaS functionality.

On December 28, 2020, we released Percona Server for MongoDB 4.0.21-16, an enhanced, open source, and highly-scalable database that is a fully-compatible, drop-in replacement for MongoDB 4.0.21 Community Edition. It supports MongoDB 4.0.21 protocols and drivers. Improvements in this release include support for multiple LDAP servers for authentication, validateLDAPServerConfig config option, and the addition of mongobridge as a part of percona-server-mongodb-server package.

December 28, 2020, also saw the release of  Percona Server for MongoDB 3.6.21-11.0. It is a drop-in replacement for MongoDB 3.6.21 Community Edition and supports MongoDB 3.6.21 protocols and drivers. This release includes a fix of the LDAP rebind procedure to allow LDAP referrals to work with ldapBindMethod==sasl

Percona Backup for MongoDB 1.4.0 was released on December 24, 2020. It is a distributed, low-impact solution for consistent backups of MongoDB sharded clusters and replica sets. This is a tool for creating consistent backups across a MongoDB sharded cluster (or a single replica set), and for restoring those backups to a specific point in time. Improvements in this version include a change of backup ‘name’ in ‘pbm list’ etc to be consistent time (~= end time) rather than start time, and the introduction of operation ID. In addition, there are several bug fixes, including empty PITR files are created on storage if PBM fails to upload oplog chunk due to insufficient range.

That’s it for this roundup, and be sure to follow us on Twitter to stay up-to-date on the most recent releases! Percona is a leader in providing best-of-breed enterprise-class support, consulting, managed services, training, and software for MySQL, MongoDB, PostgreSQL, MariaDB, and other open source databases in on-premises and cloud environments.