Annotations Provide Context to Timelines in Percona Monitoring and Management

About the Author – This blog was written as a collaboration with my colleague Jiri Ctvrtka.  Jiri is a senior software developer from Brno, Czech Republic, and has been partnering with Percona for almost a year working on various components of our Percona Platform. He’s been programming in Go since 2015 and Jiri’s got a passion for simplicity, speed, and precision of data and has focused that passion on understanding impacts of changes and reimagined the Percona Monitoring and Management (PMM) Annotations functionality.

“Does anyone remember what caused this large spike last Thursday at 2:24 am?” 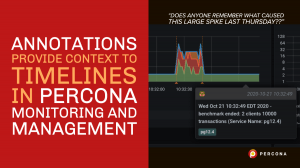 Annotations are a way to provide context to timelines in Percona Monitoring and Management (PMM). For example, in bigger teams, it is a good way to inform others about an event, or important changes that may have occurred. It can contain any kind of information but we see it most commonly used for indicating there was an outage, maintenance window start/end, deployment of new code, security event, etc.  Annotations in PMM help provide quick explanations to peaks and valleys in graphs or indicate when something took place on the timeline and create correlations. 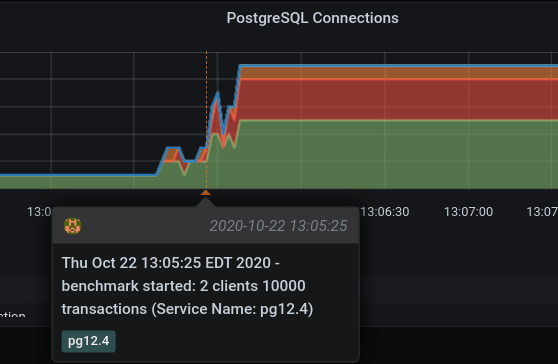 An example of annotations automatically added at the beginning and end of a benchmark test.

Every annotation can be shown/hidden by a simple toggle button presented in the filter options. So you don’t need to be worried about crowded charts of annotations. You can toggle on/off and zoom in or out around events to get better detail.

Filter contains a toggle button to turn on/off the visibility of annotations.

How Can I Add Annotations?

Annotations can simply be added by the pmm-admin option: annotate. So, let’s try it:

All these flags can be combined together for options to annotate more nodes or services by just only one command. The order of flags doesn’t matter. Just imagine how many combinations you have!  Even better, imagine how easily this can be integrated into our CI/CD or deploy pipelines!

You can also add annotations via the API with curl commands:

Some Examples for Better Understanding

Case 1: We have a DB node we need to take offline for maintenance and want to capture this on all its graphs to explain the gap in reporting data.

or if pmm-admin is running on this node then you don’t even need to know the name of this node and can set it as part of the shutdown routine.

Or you can do it in one command:

And that’s it!  All services found running on that node will be annotated.

Case 3: We have node “registrationDb” and many services running on the current node. What if we want to annotate that node and also every service running on this node by just one command? Again, no problem:

* while the PMM admin command –service flag will add to all services, you need to add all services names of the current node to get the same result using the API but you can make an API call to get all services on a given node

That’s it, no matter how many services you are running on node registrationDb the annotations will be presented on all of them and on node graphs as well.

* while the PMM admin command –service flag will add to all services, you need to add all services names of the current node to get the same result using the API but you can make an API call to get all services on a given node

The current node will not be annotated, but every service on this node will be along with node pmm-server2.

Here’s a little guide to see many of the possible combinations of flags and what will result:

So thanks to annotations, correlating events on your servers is now easier than ever.  We’d love to hear or even see how you’re using annotations to make your life easier, hopefully, we’ve given you some ideas to get started right away!