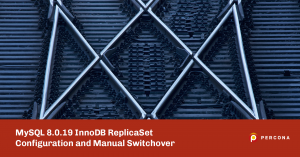 In this blog, I am going to explain the process involved in the following topics

Before going into the topic, I am summarising the points which should be made aware to work on InnoDB ReplicaSet.

How to set up the InnoDB ReplicaSet in a fresh environment?

I have created two servers (replicaset1, replicaset2) for testing purposes. My goal is to create the InnoDB ReplicaSet with one primary node and one secondary node. I installed Percona Server for MySQL 8.0.20 for my testing.

Allow hostname based communication. Make sure that you configured this on all the servers, which participated in the ReplicaSet.

In this step, I am going to prepare the MySQL instances for InnoDB ReplicaSet. Below are the major tasks that need to be performed as part of this operation.

Once you triggered the command, it will start to interact with you. You have to choose the needed options.

You can find the updated parameters from the file “mysqld-auto.cnf”. The blog by Marco Tusa has more details about the PERSIST configuration.

In this step, I am going to switch my login to the ReplicaSet account which was created in Step 2.

Now, all are set to create the ReplicaSet.

The ReplicaSet status states the Instance replicaset1 is operational and is the PRIMARY member.

Now, I need to add the secondary instance “replicaset2” to the ReplicaSet.

When adding the new instance, it should be fulfilled with all the ReplicaSet requirements. We have two recovery methods when joining the new node.

Clone: It will take the snapshot from the ONLINE instance and build the target node with a snapshot and finally add to the ReplicaSet. This method is always recommended when adding fresh nodes.

Incremental: This method relies on MySQL replication and applies all the transactions which are missed on the new instance. This can be faster when the missing transaction amount is small.

Here I have chosen the clone method for recovery.

The second instance has been added to the ReplicaSet.

How to perform the manual switchover with ReplicaSet?

As per the current topology,

Requirement: Regarding the maintenance activity, I am planning to remove the server “replicaset1” from the ReplicaSet. This needs to be performed in a safe manner and the secondary instance “replicaset2” should be available for application writes and reads.

Switching the “replicaset2” as the PRIMARY.

You can see the “replicaset2” has been promoted as PRIMARY.

Removing “replicaset1” from the group,

We can perform the forced failover using “ReplicaSet.forcePrimaryInstance()”. This is dangerous and only recommended to use on the disaster type of scenario.

MySQL InnoDB ReplicaSet is a very good feature to manage the MySQL asynchronous replication environment. It has the CLONE plugin support and it greatly helps on data provisioning and setting up the replication. But, still it has some limitations when compared with the MySQL InnoDB Cluster.