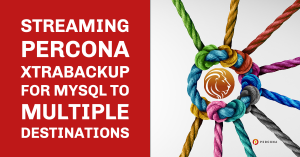 Have you ever had to provision a large number of instances from a single backup? The most common use case is having to move to new hardware, but there are other scenarios as well. This kind of procedure can involve multiple backup/restore operations which can easily become a pain to administer. Let’s look at a potential way to make it easier using Percona Xtrabackup. The Percona XtraBackup tool provides a method of performing fast and reliable backups of your MySQL data while the system is running.

As per the Linux manual page, a FIFO special file (a named pipe) is similar to a pipe except that it is accessed as part of the filesystem. It can be opened by multiple processes for reading or writing.

For this particular case, we can leverage FIFOs and netcat utility to build a “chain” of streams from one target host to the next.

Since the FIFO can be read by many processes at the same time, we can use it to restore the backup locally, in addition to piping it over to the next host.

In order to perform the following operations, we need the netcat, percona-xtrabackup and qpress packages installed.

Assume we have the following servers:

We can set up a “chain” of streams as follows:

Looking at the representation above, we have to build the chain in reverse order to ensure the “listener” end is started before the “sender” tries to connect. Let’s see what the process looks like:

After the backup streaming is done, we need to decompress and recover on each node:

We have seen how using named pipes, in combination with netcat, can make our lives easier when having to distribute a single backup across many different target hosts. As a final note, keep in mind that netcat sends the output over the network unencrypted. If transferring over the public internet, it makes sense to use Percona XtraBackup encryption, or replace netcat with ssh.