Finding a Regression in MySQL Source Code: A Case Study 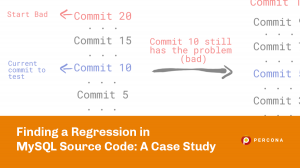 At the Percona engineering team, we often receive requests to analyze changes in MySQL/Percona Server for MySQL behavior from one version to another, either due to regression or a bug fix (when having to point out to a customer that commit X has fixed their issue and upgrading to a version including that fix will solve their problem).

In this blog post, we will analyze the approach used to fix PS-7019 – Correct query results for LEFT JOIN with GROUP BY.

737K lines in 4495 files have changed from one minor version to another.

8.0.20 alone has 1966 commits. Analyzing each one of the files or either commits isn’t practical. Let’s have a look at how we can narrow down the issue to a particular commit.

Git bisect is a powerful command in git. It navigates through commit history using the well-known binary search algorithm to efficiently find the offending commit. We basically need to specify a point that we know is bad and ideally, (if known) a starting point where we know the issue is not present. With that information, it will sort the commit from bad and good and start in the middle point. We will then have to evaluate if that point is good or bad. Based on that evaluation, it will decide to move forward or backward to the next half of commits following the binary search algorithm. The below flow helps to demonstrate it in action:

We start with a range of 20 commits, and we instruct git bisect that commit 1 is a good commit (does not have the issue) and commit 20 is a bad commit. With this information, it will checkout commit 10. Then we test this particular commit. On the above example, commit 10 is still bad, so we can infer that commits between 10 and 20 are all bad, move the upper mark (bad commit) to 10 and we move the working range to the bottom half of commits (10 to 1/ 8 commits to test).

At this point, git will stop a commit 5, and we check that 5 is still a good commit. We no longer need commits from 1 to 4 since we know they are all good. This time we move the lower mark (good commit) to 5, cutting down the working range to commits between 5 to 10 (4 commits to test). 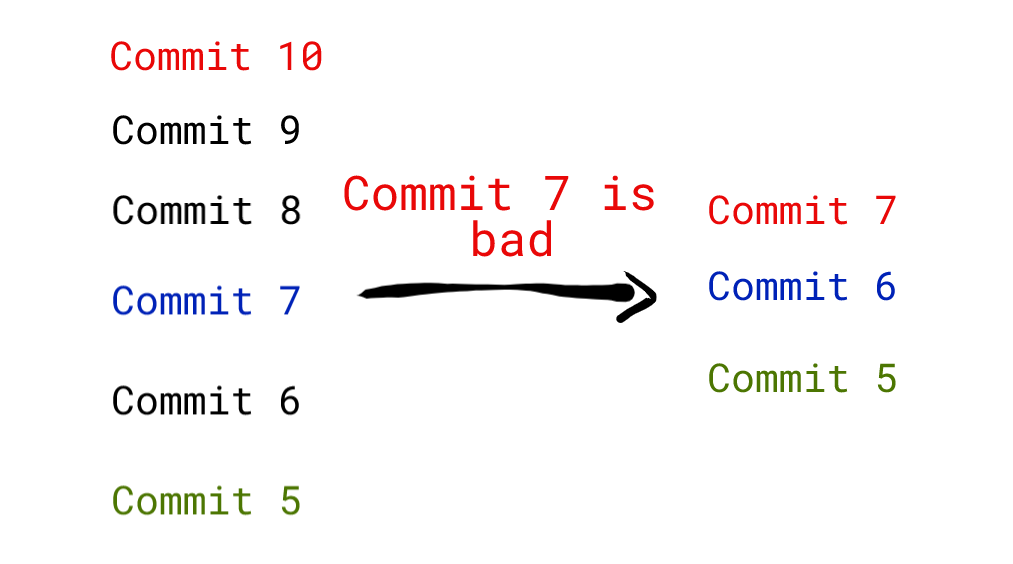 Stopping at commit 7, we have validated that it is a bad commit. As you can imagine by now, git will change the upper mark to commit 7. This leaves us to a single commit to test.

As a final step in our example, we validated commit 6 and it is still a bad commit. At this point, we don’t have any further commit to test between upper and lower marks. This means we have found the first commit introducing a regression.

MySQL has a powerful test framework – MySQL Test Run, a.k.a. MTR. For brevity, I will not enter too deep into it during this post. Readers can find more information at online documentation and in this webinar.

In the scope of git bisect, we will be using MTR as validation to test each commit to verify if it is a good or bad commit.

PS-7019 describes an issue with GROUP BY queries starting to happen on MySQL 8.0.20, where queries are returning different results from MySQL 8.0.19:

To get started, let me explain how my directories are organized:

Assuming you have a MySQL version without the issue, set up the test case by running:

With all the setup done, move t/bisect.test and r/bisect.result files into your source tree and let’s start git bisect showing bad and good commit. Here we will be passing the release tags instead of commit hash:

Git bisect will consider exit code 0 as a good commit and everything else as a bad commit.