Percona Monitoring and Management 2 Docker Created Without pmm-data? No Problem! 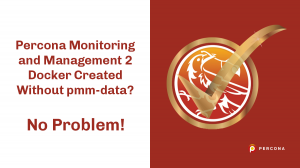 I recently worked on a customer case where he was not using a pmm-data container mounted in /srv as instructed in the official doc. PMM2 data is stored under /srv (changed from PMM1, which stored data in other directories and had different mounts for pmm-data), which means that if the content of /srv is not mounted on a separate container, upgrade or recreation of pmm-server will lose the existing data.

The procedure of backing up data stored in pmm-server and recreating pmm-server + pmm-data containers with the correct mount in /srv and no data loss is described below, but first, you should check if pmm-data is correctly mounted:

Checking if pmm-data is Holding /srv:

If you are using pmm-data container mounted on “Destination: /srv/”, you should see the following outputs while checking pmm-data:

And if pmm-server is using pmm-data, then the volume filename “Source” should match the one from pmm-data:

If you are not using pmm-data mounted in /srv, then the output will be showing a different mount (or no mount at all) such as:

Restore Into a New pmm-data Mounted in /srv:

Results should be similar to this:

Finally, pmm-server needs to be restarted so that it reloads files with correct permissions:

Docker should now be working again with no data loss! And the backup of the containers  can be safely removed with:

It’s strongly suggested to use a separate pmm-data container mounted in /srv for PMM2 to avoid loss of historical data when upgrading/recreating pmm-server. Since the data path for PMM changed in PMM2 compared to PMM1, you might be using a pmm-data container with the wrong mounts (or no pmm-data at all!) which can be easily fixed by using the above procedure.