Setting Up a MySQL and Orchestrator Docker Environment 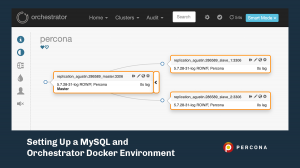 In a previous post, Using DBdeployer to manage MySQL, Percona Server, and MariaDB sandboxes, we covered how we use DBdeployer within the Support Team to easily create MySQL environments for testing purposes. Here, I will expand on what Peter wrote in Installing MySQL with Docker, to create environments with more than one node. In particular, we will set up one master node, two slaves replicating from it, and a node using Orchestrator.

Before we start, let me say that this project should be used for testing or doing proof of concepts only and that we don’t suggest running this in production. Additionally, even if Percona provides support for these tools individually, this project in particular is an in-house development and is used here for demonstration purposes only.

Docker Compose is a tool that lets us define and run many containers with one simple command:

A YAML file is used for all the related definitions needed (docker-compose.yml), like container names and images, and networks to be created. If needed, the online documentation is a good place to start getting acquainted with it, since it’s out of scope for this blog post in particular. However, let us know if you’d like to hear more about it in future blogs. Additionally, one can use a special .env file to have variables (or constants) defined.

Orchestrator is a tool for managing MySQL replication and to provide high availability for it. Again, refer to the online documentation (or this blog post from Tibor, Orchestrator: MySQL Replication Topology Manager) if you need more insight into the tool since we won’t discuss that here.

If you haven’t yet heard about it, this is a great chance for you to set up a test environment in which you can check it out in more depth, easily! All you need is to have Docker and Docker Compose installed.

In the Support Team, we need to be flexible enough to cater to our customer’s diverse set of versions deployed, without having to spend much time setting up the testing environments needed. Getting the test environments up and running fast is not only desirable but needed.

All the files needed to run this are in this GitHub project. To clone it:

First, we need to run the MySQL replication environment. For this we can use the following commands:

There are several interesting things to note here. The first is that the script dynamically creates some wrappers for us so that accessing the containers is easy. For instance, to access the MySQL client for the master node, just execute ./run_mysql_orchestrator_agustin.73b9f7_master; or to access BASH for slave01 use ./run_bash_orchestrator_agustin.73b9f7_slave01. The script will get your OS user name and the current working directory to come up with a unique string for the container names (to avoid collisions with other running containers). Additionally, we will get wrappers for inspecting container information (docker inspect …) and checking logs (docker logs -f …), which can come handy for debugging issues.

The second thing to note is that at the end, the script provides the output for docker-compose ps which will show us each container that was created, their state, and port redirections if any.

Now we have the three MySQL containers running: one master and two slaves pointing to it. Note down the master node name, since we will need it for when we start Orchestrator. In this case, it is replication_agustin.286589_master, as seen in the last outputs from the make.sh script output.

To deploy the Orchestrator container, run the following commands:

In this case, we have a port redirection enabled, so host port 32887 is mapped to the Orchestrator container’s port 3000. This is important so that we can access the Orchestrator web UI. We decided the easiest way to handle this is to let Docker choose a random (free) port in the host. If you want, you can easily change this in the docker-compose.yml file.

If you are using a remote server, you can use SSH to do forwarding to your localhost port 3000, like:

After this, you’ll be able to access localhost:3000 in your browser (or localhost:32887 if deploying this locally), and should see something like the following:

If you click on the cluster name (in our case it will be “percona” by default):

To see the same from the CLI, we can run the following command. Note how we use the wrapper for accessing bash within the Orchestrator container.

When you are done testing, you should call the scripts with the down argument.

The error shown in the first make.sh run is expected, because we are using a shared network so that the containers see each other transparently. You can disregard them if you see exactly those messages, and only for the first run.

Orchestrator has several ways to run in a highly available mode. You can read more about it here. We’ll present one of the ways for it, using Raft and sqlite (as documented here).

The first step is to, again, have a working MySQL setup:

Then, we can start our Orchestrator HA setup (in the same way as before, only using another docker compose project):

Note how we now have three Orchestrator containers, each with a port redirection to the host. The leader will be node1: orchestrator_agustin.5af896_orchestrator_1. Again, we can use the CLI to check the topology:

Or do it via the web UI (in my case, after creating the SSH tunnel to port 3000, as shown above):

Since we have Orchestrator up and running, let’s try to do a manual slave promotion:

After some seconds passed, the final status was successfully shown in the web UI (sometimes you need to wait some time, or reload the page without going through the cache, even).

To remove all containers and created scripts, run the following command:

We have seen how to create three MySQL nodes and use Orchestrator with both a single node and a three-node HA setup. If you want to make any changes to the configurations provided by default, you can find all configuration files under the cnf_files/ subdirectory, in each of the projects’ directories. Enjoy testing!