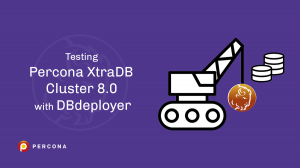 We at Percona, with my colleague Ramesh Sivaraman, have tested and deployed Percona XtraDB Cluster (PXC) 8.0.18  successfully using DBdeployer.

What is DBdeployer and How Do You Install it?

Here’s a quick rundown of DBdeployer:

DBdeployer use case with PXC-8.0

Note: Be sure to check your system and make sure that the packages are installed which Percona XtraDB Cluster 8.0 depends on.

Please select Linux Generic packages if you are downloading PXC from the web:

The following command will help you to set up a single node cluster.

There are several pre-set scripts under this deployment. We can start with testing replication status for this cluster.

Also following $HOME/sandboxes/pxc_msb_pxc8_0_18/n[1-3] scripts will help to login to the respective PXC node.

You can also check the node status using the following command: